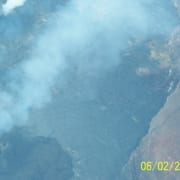 “Aloha 028 taxi ahead on Alpha, left on Golf cross runway 2 then straight on Kilo to the hangars”

Yep, you heard it right, I was on the ground at Kahului airport on the island of Maui in the state of Hawaii. No, I didn’t fly there from the mainland, my flight had originated from OGG earlier that morning. This was one of the most exciting flights of my life. Sitting in the car outside the airport fence, I had a few moments to reflect.

This flight actually began about 6 months earlier when Erin decided her wedding to Tony was going to be a destination wedding in the wine country of California. How is this related? Erin and I had worked together selling Cessnas for the previous 3 years. Her fiancee was a flight instructor at Sporty’s Academy. My wife, Rose Ann, and I decided we would attend the wedding and after all, we were nearly half way to Hawaii – so why not go there as well! Once the final destination of Kahana Beach on the island of Maui was selected, I began formulating my flight plan – a destination flight to go along with my friend’s destination wedding.

In a previous career, I taught middle school general science. In the geology part of the course we would discuss volcanoes and I remember well talking about the long continuous eruption taking place in Hawaii, the Kilauea volcano in Hawaii. I remember wishing I could see it someday during the class discussions. I also wanted to see Pearl Harbor, surfers on the Bonzai pipeline, and some waterfalls. I found out that Maui had plenty of waterfalls on the road to Hana, but Pearl Harbor was in the island of Oahu (I also found out that Hawiian’s don’t use consanants very much) and that Kilauea was on “the Big Island” of Hawaii.

I convinced Rose Ann that we should fly on a smoker (GA word for passenger jet) from San Francisco to Honolulu on Oahu. We spent the night there and got up the next morning to visit the Arizona Memorial in Pear Harbor. After a few moments of sober reflection on the sacrifice these strangers made that morning on December 7th, 1941, we decided we would visit the world’s famous Waikiki Beach. On a previous blog about the Bahamas I mentioned how I liked to avoid Nassau and Freeport in the Bahamas because of the crowds. I can add Waikiki to that list. You can see Diamond Head (looks just like the pictures) but the beach was very crowded. From there we rented a motorcycle and headed east then north on the King Kamehameha Highway up to Pupukea to see the also famous Bonzai Pipeline. The surf was up and we got to see some surfers battle the breaking waves. Much of Hawaii is tropical rain forest and sure enough it rained on us for the ride back south to Honolulu. But it was warm – and we were in Hawaii so who cares?

Next morning we got on another smoker for the brief ride to Maui. I had learned a great place to see waterfalls was on the road to Hana. 50+ miles of narrow winding road through (other than my farm) the prettiest place on the planet. Along the way we played in waterfalls, bought fresh bananas from a hippie’s roadside stand and finally (3 hours later) made it to Hana. We collected some of their black sand (weathered basalt makes black sand) from the beach. We have a tradition of collecting sand from beaches in a beer bottle as a souvenier. This allows us to both visit the beach (which Rose Ann likes) and drink a beer (which I like) at our destination. It wasn’t until after we got back to our hotel that I found out the famous aviator, Charles Lindbergh was buried a scant 10 miles from Hana. I would have liked to visit him.

The following day we drove up the extinct Haleakala volcano 10,000 feet above sea level. Here is perched an array of astronomical telescopes and the landscape is barren. Several signs warned us that it is bad luck to take any of the rocks as souvenirs from the mountains, and we didn’t have any virgins to sacrifice, so we left them alone and headed back down for the big adventure I had planned for the next day.

Prior to our trip, I had researched and found a reputable flight school, Maui Aviators. I had called and tentatively reserved a 172 for that Thursday morning. They gave me a code to get through a small gate in the airport fence and we walked over to the open tee hangar. The office was in a part of the unheated hangar and I thought that was a little strange, but, wait a minute, we are in Hawaii. No need for heat even in the middle of winter. The winds at Kahului are well known keeping even the heat of summer pleasant. We were greeted by Paul, a CFI. He explained that their insurance required I be checked out in the airplane regardless of any previous experience I had. I told him I understood and asked how much the checkout would run. He then indicated that it would be about $200 for the hour long checkout.

“Let me make you a deal,” I said. “You know the area, I need a checkout, so rather than spending an hour with you in the pattern doing take offs and landings, how about you going with us on our island tour?” Paul took me up on my offer and I was so glad to have a personal tour guide for the trip. “Just point the direction you would want to go if you were me,” I told him. Rose Ann hopped in the back, Paul and I got in the front and another adventure began.

After departing Kahuhui Class C airspace we followed the coast to the northwest to Honokohau where we headed over to the island of Molokai. We turned to the left along its southern coast for 20 miles or so until we turned south to Lanai located 10 miles across the Kalohi Channel. Formerly owned by Dole Foods, Lanai was the home of the world’s largest pineapple plantation. Turning west over the Auau Channel we flew to Maui then south over the Molokini Crater, a popular diving and snorkeling destination for tourists. From then it was another 45 nautical miles south east to “the Big Island” of Hawaii.

Hawaii is the newest island in the chain featuring both spectacular mountains and fertile plains populated with numerous cattle ranches. Soon after reachin the northeast coast I spotted 3 spectacular waterfalls spewing from the cliffs adjacent to the ocean. “Quick! Take a picture!” I told Rose Ann, not realizing there would be many more such waterfalls as we made our way down the coast. To our right the mighty Mauna Kea mountain, whose elevation is over 13,500 feet, disappeared into the clouds. Upon reaching the town of Hilo we turned west again and began our 4,000 foot climb up to the Kilauea cauldron. Paul told us that the clouds we were experiencing around the volcano were normal and they were easily avoided. We kept a sharp eye for tourist helicopters and Paul broadcasted our position on a multicom frequency in regular intervals.

My dad used to say land was a good investment because “They’re not making any more of it.” Well, he hadn’t visited Kilauea. We saw the molten lava welling up from the crater and saw it creeping outward to where it was doused in the sea. Pretty amazing stuff and we had the best view ever. We flew back and landed in Hilo to stretch our legs and get gas for the trip back to Maui.

Crossing the Alenuihaha Channel again brought us to the island of Maui just southwest of Hana. “Do you know where Lindbergh’s grave is?” I asked Paul. Of course he did and we turned towards a small church with surrounding graveyard. I got to visit with Charles, albeit from 1,000 feet above him. After that we headed north and too soon were approaching the OGG airspace. We were vectored to land runway 5 but still had to negotiate the usual substantial crosswind. We taxied back, tied the aircraft down, took the obligatory pictures, paid our bill and walked back out to the car.

Plan your destination flight somewhere you have dreamed about, I’m sure yours will be amazing as well.

Flying myself and Rose Ann in a GA airplane over an active volcano – Priceless!