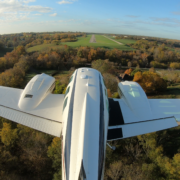 Aviation is an industry where pilots are always learning. The term “go-around” isn’t a term just used in the training environment, but one that is used by all pilots in every industry segment. A go-around can save a pilot from an unsafe situation upon landing and is often the best, if not the only, option.

Going around can sometimes be observed by pilots as a waste of time. Time spent on completing a successful go around and circuit in the pattern can eat away at a pilot’s patience, therefore, some try to salvage the bad approach and force the landing. Pride and landing expectancy are other major factors that aid in a pilot trying to salvage an unstable approach to landing. Pride or the mistaken belief that the act of going around is an admission of failure—failure to execute the approach properly. Landing expectancy is the anticipatory belief that conditions are not as threatening as they are and that the approach will surely result in a safe landing.

Whenever landing conditions are not satisfactory, a go-around is required. Many factors can lead to a stabilized approach. A stabilized approach is one in which the pilot establishes and maintains a constant angle glidepath towards a predetermined point on the landing runway. It is based on the pilot’s judgment of certain visual clues and depends on maintaining a relatively constant final descent airspeed, descent rate and configuration.

Many factors can affect the stabilized approach including the unexpected appearance of hazards on the runway, overtaking another airplane, wind shear, wake turbulence, and mechanical failure. The earlier that a pilot can make the decision that a go-around is necessary, the safer the go-around can be conducted due to the aircraft’s proximity to the ground.

After the decision is made to go-around, the pilot’s first action is applying full power. The application of power should be smooth and deliberate without cramming the throttle. Abrupt cramming of the throttle in some aircraft, specifically carbureted aircraft, can cause the engine to hesitate.

The airplane, when first executing a go-around, should be maintained in a pitch attitude that permits the build-up of airspeed well above the stall point before any effort is made to gain altitude or to execute a turn. In some cases, lowering the pitch attitude may be required to attain sufficient airspeed before initiating a climb; however this should only be the case if you allowed the airspeed to dip below the normal final approach speed.

After establishing a proper climb attitude and power setting, the pilot can then focus on configuration, such as flaps and even landing gear if flying a retractable. It’s important to retract the flaps in increments rather than retracting all at once. If the flaps are retracted all at once, the aircraft is at risk of losing a substantial amount of lift resulting in the aircraft settling into the ground.

After the aircraft begins safely climbing away, if at a non-towered airport don’t forget to announce a go-around. Radio calls are important however, in the hierarchy of aviate, navigate, communicate, remember to fly the airplane first. The radio call should only be prioritized when the airplane is climbing and properly configured during the go-around.

The list of common errors in the performance of go-arounds range from failure to recognize a condition that warrants a go-around, indecision, delay in initiating the go-around, improper pitch attitude, and finally, loss of aircraft control. Every go-around situation in aviation is different. Pilots need to maintain alertness and make decisions rapidly.

Go-arounds should be practiced in the training environment. The go-around technique is something that could show up on a check ride with a designated pilot examiner. Practicing a go-around will reinforce the required procedures to complete the procedure safely and at maximum efficiency. As a student pilot, I remember how much importance my instructor put on the go-around procedure. This constant review and practice carried over into my style of teaching as a flight instructor.

Trying to salvage a bad landing or force an aircraft down onto a runway is never the answer to a stabilized successful landing. As pilots begin to build experience, it becomes easier to acknowledge an approach that could potentially lead to an unsafe landing. The development of recognizing unstable approaches begins very early in training as it is a safety necessity. There is no shame in going around. The next time you are out flying, try practicing the go-around technique so when the situation calls for it you know exactly what to do.