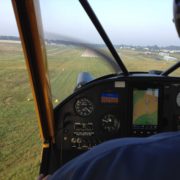 Perfection – our goal as we complete life’s tasks.  While perfection is a goal, it is unlikely to be the result of our labors.  At some point in time, we decide those efforts, though not perfect, are “good enough” and move on to our next endeavor.  But how do we determine what is good enough?

Usually it is by some self-determined  internal standard that may be somewhat fluid based on time available, existing resources and our mood at the moment. While our moods can swing, resources can vary, and our daily calendar fluctuates, pilots must deal with Sir Isaac Newton’s Laws of Gravity and Motion which remain constant and unrelenting. Therefore, flexible standards will not work for long in the cockpit as we continually struggle to balance inertia and power, as well as actions and reactions to safely sustain our craft aloft against the ever-present force of gravity. Our standard for “good enough” must be as relentless as those Laws governing matter in the universe.

Fortunately, the FAA, after exhaustive input from our industry, has provided us with the Airman Certification Standards (ACS).  These manuals thoroughly describe the maneuvers needed to safely fly an airplane. Because perfection is unrealistic, the ACS also describes the tolerances allowed for conducting those maneuvers.  The goal of flight education is to develop skills necessary to conduct these maneuvers within those tolerances.

Last week a flight student came into the office upset over the result of one of his Part 141 stage checks.  He had been deficient in several areas largely because he had replaced the ACS with his own ideas of good enough – that weren’t.

How much gas do I need?  How many people can I take?  I am considering flying to friend’s grass strip.  Is it long enough?  While gravity is a constant, the answers to this set of questions may vary greatly from aircraft to aircraft.  Those answers, however, are available to us in the aircraft’s Pilot Operating Handbook (POH).

The POH is like an encyclopedia for your airplane.

OK for those of you not around when you had to get out of your chair, walk across the room to change to one of three available channels on the TV, encyclopedias were a collection of books providing information on many subjects.  Think of them as a paper Google from the 1900s.

Again, the POH provides the performance standard rather than that runway will probably be “good enough.”

There I was, stuck.  Why?  Although I had practiced “soft field” landings on pavement I had never really landed on a soft field.  While taxiing over to the tie downs, evidently I found a really soft spot and the airplane started to sink into the mud.  Feeling something amiss, I instantly retarded the throttle rather than advancing it.  If only I had reviewed the POH on soft field operations prior to landing here.

While gravity stays the same, seemingly the weather never does.  The FAA defines the weather allowed for visual flight, but have you ever flown when there is only a thousand foot ceiling and three miles of visibility?  Remember those VFR flight minimums were probably established when pilots were flying Cubs, Champs and Stearmans, usually only a few hundred feet above the ground (no cell phone towers back then) and a top speed of 85 MPH.  Perhaps those weather minimums weren’t even safe then and as pilots we subsequently learned an instrument rating was essential as the capabilities of our aircraft increased.

And what about wind?  In what crosswind component can you safely land?  What crosswind component HAVE you landed?  Continuing because you think you are “good enough” to land in that crosswind can result in bruised egos or bent metal.  Developing standards with your instructor regarding ceilings, visibility and wind before you fly, when there are no passengers applying pressure, or business deal to conclude, may keep you and your airplane safe.

There I was, in the grass beside the pavement, the Cub pointing at the landing end of the runway. Why?  I had arranged to fly with a friend during lunch.  As we walked out to the airplane I glanced at the flag which was now indicating a freshening breeze creating a left crosswind whereas all morning it had been hanging limp.  That’s interesting, I thought, but there was my friend wanting to go flying and I thought the wind was still “good enough.”  It wasn’t.

Flying airplanes does not require perfection, but for a successful flying career it does require standards.  By taking the time to study the ACS, POH and develop your own for weather, the odds go way up on the likelihood the number of successful landings will be exactly equal to the number of takeoffs, your number of “there I was” stories will be very limited and you can look back on your flying as being “good enough.”