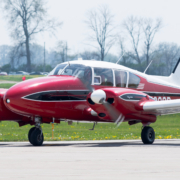 Learning to move the aircraft around on the ground can be just as difficult as learning steep turns. And it’s nothing to be ashamed of because it’s common and taxiing is not natural. It’s nothing like driving a car, and can be frustrating zigzagging down the taxiway or making turns too sharp or shallow until you’ve mastered the skill. Here are the top 5 mistakes I see routinely at our home airport. An awareness of the most common mistakes will have you mindful and vigilant on your next flight.

The number one violation we see at our airport is aircraft taxiing too fast.  Student pilots normally don’t violate this one as they tend to be slow and methodical. It’s normally the pilot who requested a quick turn from the FBO after jamming on the brakes to make the mid-field turn off. Flying (and taxiing) should never be hurried. Most instructors teach that the proper speed for a taxi is nothing more than a brisk walk. Think about what distance it may take to roll to a stop if you were forced to pull the power and adjust your speed so this could be accomplished in a reasonable distance.

Excessive use of brakes

A great flight instructor of mine once told me, “You can either have power in or use the brakes, but you can’t do both because that just doesn’t make any sense.” He was right. Riding the brakes while taxiing can lead to excessive wear on the pads and rotors and can generate excessive heat. While it’s good to perform a brake check as part of your initial taxi, try your best to keep ahead of the airplane and use your brakes sparingly on the taxiway. Same rule goes for taxiing in as taxiing out.

Always taxi with your nosewheel on the centerline of the taxiway. Moreover, try to maintain the centerline by only using rudder/steering control and not with the use of differential brakes. While this might seem hard when you first try it, you will soon get used to the feeling and be able to anticipate the momentum of the airplane. Having precise control while taxiing will help as you manage directional control during the takeoff. Being in the exact center of the taxiway might not matter for the wingtips of your Cessna 150 that you’re training in, but remember you’re preparing for something bigger and faster, right? Having correct crosswind input on your control surfaces will also help you maintain the centerline.

Training at a pilot-controlled airport and then flying to a towered field (or vice versa) can lead to communication confusion. Do I call ground before starting the engine? Can I taxi to the end of the ramp without permission, or do I call before releasing the brakes? If I’m not required to make any calls at a pilot-controlled field, should I announce that I’m taxiing? My own rule of thumb: if in doubt, over-communicate. You might sound weird, but it beats getting a verbal lashing from the tower.

Always have a plan when you begin to move and avoid distracted taxiing by getting your flight deck set before leaving the parking space. This will allow you to focus on your route and communication.

Most pilots don’t know this but taxiing with full flaps down is equivalent to squawking 7500 on your transponder – a sign of distress. The idea is that the tower or ATC would see this abnormality and be able to intervene without the hi-jacker knowing that anyone had been tipped off.  I was alerted to this unwritten rule when a “Senior” CFI wanted to give a student departing for a long cross country a hard time. The student had left the flaps down after pre-flight and taxied to the runup area without retracting them. Given that the student was going solo, it made for a fun radio conversation.

A good flight starts with an uneventful taxi and proper set up for departure.