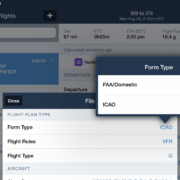 As your flight training progresses and you start flying further away from your local practice area to new airports, you’ll learn all about VFR flight plans and their role in the aviation system. This free service is designed to let someone know that you’ll be out flying for the day, your planned route of flight, and when and where you expect to land. Then in the unlikely event you have to perform an off-airport landing and are out of range of communications, rescue workers will know where to come looking for you.

In the days before computers and tablets, these were typically filed with a Flight Service Station (FSS) over the phone, and then activated in the air by calling FSS again over a dedicated radio frequency. Mobile technology has changed this though, and most pilots take advantage of the VFR flight plan functions in mobile apps like ForeFlight and Garmin Pilot, or directly on the Flight Service website (learn more about how to file a VFR Flight Plan from a variety of mobile apps here).

There’s an important change that goes into effect today related to the form used to file your VFR flight plan. You most likely have been using what’s called the FAA (or Domestic) flight plan form, which collected the essential details of your flight, including aircraft type and N#, route info and your contact information. Starting today, you’ll need to start using a new form when filing VFR flight plans, called the ICAO or International flight plan form.

ICAO stands for the International Civil Aviation Organization, and the group’s goal is to keep aviation processes and infrastructure standard across all countries in the world. Fortunately, most of the major iPad apps and online web planning services support the ICAO flight plan form as an option when submitting a flight plan, so the infrastructure is in place to make it an easy transition for you.

Looking at the ForeFlight app as an example, head over to the Flights tab and set up a sample VFR flight from your home airport to another airport. After entering the basics, tap the Proceed to File button at the bottom of the screen to load the flight plan window. Tap the “Form Type” row at the top, and switch the method from FAA/Domestic to ICAO.

After a quick glance, you’ll notice that the ICAO form requires much of the same information as the domestic form. The big difference is that the international form requests more details about your airplane’s navigation, communication, surveillance (transponder) and survival equipment in greater detail. While this may seem intimidating at first, you’ll only need to do it once when setting up your airplane’s profile in the app and it’ll be saved for future use.

Setting up your airplane profile

The ICAO flight plan form requires you to identify each part of your avionics configuration.

We’re going to continue with ForeFlight to show how this all works. Go to the More tab, select Aircraft from the options on the left, and choose one of your existing profiles. ForeFlight includes a lot of customization options here, with a mix of performance data used for flight planning, along with required data for the ICAO flight plan form. Here are the areas to focus on for now:

If you’re flying IFR or want to be more precise on the equipment fields, check out this article on how to determine your exact ICAO equipment, surveillance and PBN codes: How to Comply with ICAO Flight Plan Requirements.

The hard work is now done. After saving your updated aircraft profile, ForeFlight will automatically populate the flight plan form each time when filing a new VFR flight plan with the ICAO form type selected. You’ll be able to review all the details (and modify emergency equipment as necessary) each time prior to submission. After pressing File, the data is sent the same way to Flight Service, and you can open and close it using the traditional methods on using your airplane radio, telephone or in the apps.

One improvement worth pointing out is that file VFR Flight Plans now include the supplemental pilot data field in the transmission to Flight Service, which contains pilot contact information, along with the VFR flight plan to the destination facility, to reduce Search and Rescue response times.