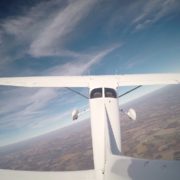 I narrowly escaped a midair collision. However you may choose to define “luck,” credit this phenomenon with another save because, by the time we saw the other airplane, it was too late for our climbing turn to have prevented an impact if it were meant to be. And by virtue of the other airplane never having taken evasive action, I’m confident they never saw us. We were clearly flying at nearly the same altitude in opposite directions.

I was acting as a flight instructor at the time, and was nearing the completion of a local, instructional flight in our flight school’s very familiar designated practice area. My client, Mike, was a Commercial pilot applicant very close to the completion of his training program. We had completed a series of Commercial maneuvers in final preparation for a checkride and I had just directed our flight back to the airport. We were only about 8 miles away.

I opted to make some notes for the debrief while Mike flew our C152. Moments later, my head still down in the cockpit, Mike shouted a slew of expletives through the headset and I felt the positive G-load against my seat as he aggressively entered a climbing left turn.
“What happened Mike?” is what I managed. “Look behind us” was the only response he could muster.

As I turned my head, the low-wing Piper was still close enough that it appeared I could reach out and touch it. In the matter of an instant, the big-sky theory forever debunked. And we were fortunate to have been left to provide this cautionary tale.

Looking for traffic conflicts is an active process. The eyes naturally focus somewhere even without a clear target. If the eyes aren’t purposely refocused the natural focal point will relax to a more comfortable distance at roughly the edge of the spinner in a light, general aviation airplane.

Effective scanning is accomplished with a series of short eye movements that bring segments of the sky into our central field of vision. Each movement should not exceed 10 degrees and we should also be aware that our eyes will likely require several seconds to refocus when switching between sky segments or back and forth between the flight deck.

What can be do to better our chances?

More time outside – proper vigilance is the constant division of attention between flight deck tasks and actively searching for potential conflicts. And it’s a better view! Stop staring at the iPad and take a look around. Be sure to check blind spots – those areas behind wing struts or directly in front of you if in a prolonged climb (by occasionally lowering the nose). Lift a wing before making a turn for a visual clearing of the area. And don’t blindly follow ATC instructions or believe that you’ll be alerted by ATC of potential conflicts. It’s a team effort. Trust by verify.

Follow altitude rules – by regulation we’re required to fly at odd thousands of feet (+500 for VFR) while eastbound (000 – 179 degrees) and even thousands while westbound (180-359 degrees). It’s prudent to do so in the interest of reducing collision threats.

Include all of your resources and technology – traffic awareness technology such as the traffic broadcast available through ADS-B is enlightening to say the least. There are gaps especially for those flying aircraft not equipped with ADS-B OUT, but the picture is becoming more reliable every day. Technology doesn’t replace the need to see with your own eye, but is provides a worthy supplement.

Take advantage of VFR flight following anytime you’re within radar coverage. It’s provided on a workload permitting basis, but serves as another valuable set of eyes. And established communication coverage can be of benefit if any form of emergency service is available.

Enlist the assistance of those in the aircraft to also be responsible for seeing and avoiding traffic. It’s engaging and entertaining for everyone to be an active participant in the process.

Vigilance during higher-risk operations – maintain a heightened state of awareness when approaching and traversing high traffic areas such as airports, points of interest over the ground or in areas of intense training activity. Consider routes and altitudes to help mitigate the increase risk.

Increase your visibility – operation lights on. Take advantage of anti-collision or recognition lights, navigation lights and taxi or runway lights in high traffic areas. Turn on your landing lights when beginning the takeoff roll and keep lights on when operating below 10,000 feet, day or night, especially within 10 miles of any airport, or in conditions of reduced visibility

Talk and listen – especially in the vicinity of non-towered (pilot-controlled) airports, adhere to both standard traffic pattern procedures as outlined in the AIM and standard communication procedures. Take the time to listen thoughtfully to other position reports and anticipate the location of potential traffic conflicts. And always assume there could be other traffic in the area not communicating as expected.

It also helps to be a good aviation citizen. Concede your position in the patter or place in line for landing if it means greater safety margins.

How about your scariest moments? What did you learn?