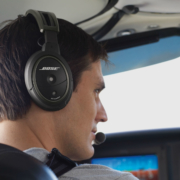 Buying your first headset can be confusing. There are a lot of things to consider: passive noise reduction (PNR) vs. active noise reduction (ANR), plug types, Bluetooth, aux inputs, ear seals, and finally mono vs. stereo. While we won’t tackle every subject in one blog, we will attempt to answer that age old question: Do I need a mono or stereo headset?

Quick history lesson: the first aircraft intercoms were all monaural, or mono for short.  What this means is that one audio signal is fed to the headset. Many of the early headsets only had one earcup with one speaker. The other was left open. Later, headsets had an ear cup and speaker for both ears. Both speakers were provided the exact same signal, which means you get the same sound to both ears.

Stereo sound came along and provided two separate signals. This allowed record companies to put different sounds to each ear. The best demonstration of how this works is if you are watching a car chase on a movie in your living room. The producers can make the car sound like it is moving from the left to the right of your room by pumping up the sound level in the left speaker, then decrease it while increasing the sound level in the right speaker. Match this up with the car going across the screen, and Joe Consumer thinks he’s on the same street as the car chase. You can get surround sound by adding more speakers, but the same concept applies. In addition to sound levels, we can put the fiddle in the back right corner speaker, the stand-up bass in front left corner, while the banjo is on the back left with the vocalist in the middle right and I’m in the middle of a bluegrass concert.

How did stereo sound get into aviation?

Some pilots like to listen to music while they fly. Garmin started equipping avionics with XM Radio back in the early 2000s. Listening to music in stereo is much more pleasing to the ear than listening to it in mono. The big headset manufacturers started offering headsets in stereo, also. Almost all modern ANR headsets feature stereo sound. Which, if you think about it is a little odd, because all ATC radio transmissions are mono. We’re not using stereo to hear ATC better, we want to hear that banjo on the right and the fiddle on the left. Many intercom makers started providing a stereo option over 20 years ago. This allowed pilots to pipe stereo sound through the entire intercom.

How does this affect aviation and your decision for headsets?

There is one problem with stereo headsets. If you plug a stereo headset into an intercom wired for only mono headsets, you will only get sound out of one ear cup. This is due to the wiring of the headset, as it is expecting to get two different signals instead of one. Luckily, almost all stereo headsets include a switch to revert to mono. This allows the headset to accept the signal channel from the intercom and split it to both ears.

Which headset should you buy then? It depends on what you are planning on flying. If a 1962 Cessna 172 is all you’ll ever fly, don’t waste the money on a stereo version of the David Clark H10-13.4. But if you are going to fly something made in this millenium, you should probably opt for a stereo headset. The most modern Garmin intercom can even do 3D sound, where COM 1 comes in the left ear and COM 2 plays in the right ear. It’s magic if you ask me, but you will need a stereo headset to fully experience it. Personally, I lean towards stereo headsets. Technology has provided us the ability to use multiple signals; we should embrace that. Just make sure the stereo headset has a switch to revert to mono if needed. If the stereo headset you are looking at doesn’t have a switch, stick to the mono version.

Most premium ANR headsets still provide stereo music capability even if you switch them to mono. The idea is that the Bluetooth or aux input will always be stereo regardless of intercom capability. After all, if you’re going to spend over $1000 for a headset, you would expect your bluegrass music to be perfect.