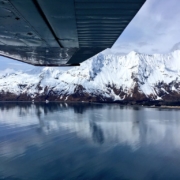 Want to do some bush flying in Alaska? “Yes, yes I do.” It took all of 1.3 seconds for me to reply when an opportunity arose to fly the backcountry of Alaska for a couple days. Flying a taildragger in the remote wilderness should be on every pilot’s bucket list. Not just for the amazing experience and unspoiled, breathtaking views, but for the real world flying knowledge that will make you a better pilot.

We began our adventure on a Sunday evening aboard a Cessna 185 Skywagon on what Alaskan bush pilots refer to as “baby bush wheels.” Departing downhill on an 1,800 foot strip, fully loaded with three guys and gear didn’t faze the 185 – a favorite in the Alaskan bush. The phrase “If it fits, it ships” would have been the perfect tag line.

We flew south and crossed over top of Anchorage. Ceilings were low, but we were able to escape to the south towards Homer as the sun was setting. Since it was early May, the sun took its time setting and gave us plenty of time to enjoy some amazing color as we flew over the Kenai peninsula. It was readily apparent the only way to see the true beauty of Alaska would be by bush plane.

Homer, Alaska looked like a postcard from a gift shop. Located on the water with a massive backdrop of snowcapped mountains, this tourist town lived up to its reputation with scenic views and great food. A morning departure south across the Kachemak Bay led to our first of many crossings of glaciers and icefields. Descending into Kenai Fjords National Park bought our first experience of low level flying next to towering mountains of ice and snow. The remote wilderness was punctuated by abrupt cliffs, bays, and massive rock beaches.

We crossed back over terra firma at Seward and flew north to cross Kenai Lake. Towering mountains with steep, snow covered ravines kept the lake cold and blue. Next our Skywagan escaped towards the northwest and our next destination: Lake Clark National Park.

Pushing across the Cook Inlet, we took to a mountain pass to finish our journey to Lake Clark. Our original plan was to make it all the way to Katmai National Park, however, turbulent air in the mountain pass made us think twice about pushing that far. We took a well-deserved break at Port Alsworth on Lake Clark. This remote outpost had parallel gravel runways, seaplane parking, and friendly folks. A Kodiak on floats was soon joined by an Otter amphib while a DC-3 landed ferrying in fuel. Just another day in the Alaskan bush.

After our rest, we departed Lake Clark and flew a more northern pass. This pass proved to be smoother and put us more on course to our destination: Talkeetna and Denali National Park. Flying toward Denali in the evening meant the mountain was in full sunlight. Seeing that 20,000-foot peak in the distance will make you feel tiny in any size aircraft. We landed in Talkeetna with plans to fly around Denali the next day.

Talkeetna is another tourist-laden town known as the gateway to Denali. Cruise ship passengers travel from Anchorage via train to experience the mountain. Main street is peppered with bars, small restaurants, and souvenir shops. All of this is within walking distance of the airport where many of the “Land on a Glacier” tours originate. Several operators fly Otters and Beavers on skis to provide tourists with the ultimate Denali experience. If you don’t have the benefit of a friend with an airplane, this would definitely be the airport for your launch around Denali.

The next day our goal was to depart Talkeetna and travel around Denali while getting some landings in on a gravel bar. We would then make our way back to Anchorage for our flight home. We fueled up the 185 only to find Gary Ward and his MX2 also making a fuel stop. Our 185 had cameras mounted in several strategic locations to capture our Denali flight and Gary didn’t have anywhere to be for few hours. With Denali in full view and perfect weather, the group consensus was to brief and execute an air-to-air photo shoot with Denali National Park as the backdrop.

This flight is the stuff pilot dreams are made of. The bright green MX2 popped off the raw rock faces and the white glaciers. Formation flight through the peaks of Denali National park was beyond amazing. At one point while trying to get a shot of Gary flying between two peaks, there was a thin cloud layer above us providing just the right amount of light to keep everything in perfect focus.

We weren’t done yet. Hitting a gravel bar to film some bush pilot takeoffs and landings might have rivaled Denali. Alaska is one big pilot playground. Everything is open to airplanes. The art of gravel bar landing is what makes bush pilots really stand out. How firm is the touchdown point? Uphill? Downwind? Landing might be easier than taking off. Our expert bush pilot found a spot more than long enough and in great shape. With over a thousand feet to work with, the Skywagon lurched in the air with room to spare.

Reflecting on this experience while riding in the back of a Boeing to the lower 48, I can fully understand why pilots come to Alaska and never leave. Aviation isn’t a secondary mode of transportation, it’s often the only.

5 things I learned from flying in Alaska