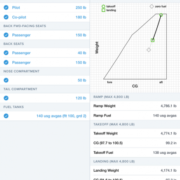 A recent news story told the tale of an aircraft accident where six adults had loaded themselves into a single engine Piper and taken off on what was to be pleasure flight but ended in tragedy. While this variant of a normally 4 place airplane was manufactured with six seats, it doesn’t mean that all seats could be loaded without doing a careful analysis of the aircraft’s performance, including its weight and balance.

The NTSB has issued a preliminary report but a final report with the cause is months away. Using the data from the preliminary report, it can be seen that the density altitude at the site of the accident was over 3300 feet that evening.

This density altitude would contribute to a degradation in performance and I have talked about density altitude safety factors in previous posts. It is not yet known how the weight and balance affected the flight but six adults would certainly weigh heavily on the performance. Depending on the CG location, it could also affect the ability to recover from a stall. We’ll leave the final conclusions to the NTSB.

Let’s face facts. As pilots, many of us do not do a weight and balance calculation every time we go fly. If you are going flying by yourself in an airplane with which you are very familiar, you may be comfortable and feel safe with the last several times you did the calculations for this airplane and not feel like you need to run the numbers for every flight. You might be correct in this assertion if there is a wide margin of safety between your weight and the limitations of the aircraft.

But, when you start adding people and bags, or are less familiar with the airplane, your margin of safety decreases and you really need to check those numbers!

The NTSB preliminary report on the Piper accident indicated that the flight to pick up the passengers was the pilot’s first flight in the airplane. The accident flight would have been his second.

I’ve heard older pilots talk about the “good old days” when a lot of pilots learned to fly in Cessna 150s. They make comments indicating that these airplanes were often flown over max gross weight because they had such a low useful load. I don’t doubt that this is true. Perhaps it is this mentality learned early on (Law of Primacy) that has caused a sometimes pervasive belief among some pilots that if you can close the door, the airplane will fly. This is simply not true!!

Any time you are flying an airplane outside its limitations, not only are you flying illegally, you are acting as a test pilot. Takeoff distance, climb performance, landing distance, stall speed, stall recoverability, spin recoverability, structural safety margins, and many other factors are based upon an airplane that is at or below its maximum gross weight and that is within its allowable CG range. Outside these limits and the physics are against you.

Simple Solutions to the Weight and Balance Problems

What I would like to encourage you to do is find a simple solution to calculating weight and balance that you can do for each and every flight or at least for every flight that is even slightly outside your normal flight operations.

Today, there are a number of apps and computerized solutions that will take care of the weight and balance calculations for you. All you have to do is build an aircraft profile or select your aircraft’s pre-built profile from a menu of available solutions. If you opt for a built in profile, take the time to verify that the data is correct for your particular airplane. Once you have a profile for your aircraft, simply enter the data for the particular flight and verify that the output is within the limitations of the aircraft. These solutions may also provide performance calculations as an added bonus to improving the safety of your flight.

You can also create a similar solution in a spreadsheet program such as Excel or Google Sheets. These programs may also be available on your phone or tablet as a convenient resource. Create a template for each of the airplanes that you typically fly then add the data for the conditions of the day. If you are really proficient at these programs, you might even be able to use the graphing functions to provide a visual display of the weight and balance solution. Don’t forget to verify the weight and balance for both takeoff and landing. This can be critical in some aircraft.

Of course, you can always rely on the paper solution that we were taught early in our flight training. This method may take a bit longer for each flight but it will be as accurate as your math skills. Some pilots create multiple weight and balance solutions for “typical” loadings in the aircraft then select the one which most closely matches the loading for the day. This works great if you always fly the same airplane with the same people and the same fuel load. If the loading isn’t typical, do the calculations.

Flying Safely Is No Accident

We often hear about how safe flying is when compared to driving, and in the carefully calculated and safety managed environment of the airline world, this is true.

In general aviation, safety requires a deliberate approach to risk management that includes determining the weight and balance and performance of the aircraft for every flight. It is only through appropriate training and by mitigating as many of the risks as possible that we can have a long and safe experience as a general aviation pilot.

Stay safe out there!