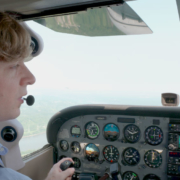 Learning how to talk on the radio is important, but many pilots spend far too much time stressing about it. It’s right up there with crosswind landings on the list of most uncomfortable parts of flight training, but it doesn’t have to be. For a start, remember that most communications mistakes are not fatal – you can almost always try again if something isn’t clear – so the fear is really public embarrassment more than a critical safety issue. That means improving your communication skills is mostly about feeling comfortable and confident.

So how do you feel more confident on the radio? There’s not substitute for practice and experience, but there are some habits that can accelerate that process.

Know the roles. I like to think of flying as if it’s a stage play or a sports team: everyone has a specific role to play, and the whole thing works best when everyone plays their role (and nobody else’s). First and foremost, that means you have to know what’s expected of you. Sign up for an online communications course, read the Pilot’s Handbook of Aeronautical Knowledge, and study the Pilot-Controller Glossary. A touch boring? For sure. But you can’t say your lines confidently if you don’t know the script.

Beyond that, any good actor or athlete spends time learning about the other roles too, so that the whole organization works together seamlessly. The same is true for flying, even if you can’t see the other pilots or controllers. Learn about the Air Traffic Control system and airspace, beyond the FAA Knowledge Test answers. It’s surprisingly interesting, and once you understand what the tower controller is responsible for compared to the approach controller, your next radio call will make a lot more sense. After all, knowing what to expect is essential for good communications.

For example, if you know that TRACON airspace (ie, approach control) is usually within about 30 miles and 10,000 feet of the main airport, you won’t be surprised when you are told to “contact center” or “radar services terminated” at 29 miles.

Keep a 3D picture in your head. Once you know the roles that different pilots and controllers play, try to keep an ongoing picture of the airspace around you as you fly. Don’t just listen for your N-number; use the other airplanes on your frequency and the controller’s comments to build your own mental radar display of where everyone is and where they’re going. This shouldn’t come at the expense of flying the airplane, but with some practice it becomes pretty easy. Doing this will improve your overall situational awareness and is a good double check in case someone makes a mistake, but it also keeps you in the loop so you can anticipate what comes next.

I was recently flying in busy airspace around Florida, and my “mental radar” suggested that another airplane was close to my altitude and converging on my position. When I heard ATC call out traffic for that airplane at 12 o’clock and two miles, I was pretty sure that traffic was me. Sure enough, the next call was for me to look for traffic at 3 o’clock, same altitude. Before the controller was finished saying that, I had spotted the airplane, so I could quickly respond, “traffic in sight.”

An aviation scanner or radio is a great way to improve your communication skills.

Listen anywhere you can. You don’t have to be flying to hear scenarios like this, and technology has made it easier than ever to play pilot (or controller) on the ground. The best method is to grab a hand-held aviation radio and head for the airport. Stand at the fence or sit on the porch of the flight school and watch airplanes take off and land while you listen on your radio. Visually matching an airplane with the radio call is great practice, and it doesn’t require good weather or a flight instructor to do it.

If you can’t make it to the airport, there are still plenty of good options. I use a Sporty’s Air Scan radio at home, which scans 10 local frequencies (for me it’s two non-towered airports, one towered airport, plus approach and center) while I listen to music. There’s almost always someone flying, so this dramatically increases your exposure to real world communications. Listening to airline pilots is particularly helpful – they are obviously experienced, but they also fly every day and usually follow standard operating procedures. Get a feel for the back-and-forth cadence of airline pilots talking to controllers.

If you don’t have an airport nearby, the LiveATC website and app is a terrific option. It offers internet access to hundreds of ATC frequencies from around the world. You’ll find more Class B airport towers and approach controllers than quiet country airport CTAFs, but that’s OK. For the ultimate listening session, I’ll pair my iPhone running the LiveATC app to my Air Scan. Then I can listen to LiveATC but have the radio interrupt those broadcasts when a local radio frequency becomes active.

Go to busy airports. Some students, especially if they train at non-towered airports, are afraid of towered airports. Don’t be. The controllers are almost uniformly friendly and helpful, and you have every right to fly there. Mixing it up with the big boys is great practice, and I found it to be a real confidence booster. If your instructor hasn’t taken you to a busy airline airport, ask to do it on an upcoming lesson – but plan to avoid the busiest “push time,” usually early in the morning and late in the afternoon.

Flight following is a great way to increase your confidence.

Slow down. It’s tempting as a new pilot to talk as fast as you can, maybe in an attempt to sound like those silky smooth airline pilots. Resist the urge and slow down. If your mouth is ahead of your brain, you’ll likely stumble on a word and lose your train of thought. Even on a busy frequency, a slow but carefully worded radio call is much better than a Mach 2 stream of words that has to be repeated three times.

Don’t overthink it. Some pilots view radio communications as a code, or a secret society with its own unique passwords. That’s a mistake. At the end of the day, pilot-controller communication is a conversation between two humans. When in doubt, explain what you need in the simplest terms. If you forget the ATIS you just heard was Charlie and instead say, “I listened to the weather,” it will still work out. You should strive to do better next time, but the controller will know what you mean. Likewise, while it might be precise to say “mid-field left crosswind, runway 22,” sometimes the brain freezes. Instead of panicking, just explain what you’re going to do: “we’ll overfly the runway to enter downwind.” And when in doubt, ask ATC or another pilot on CTAF for clarification.

In almost every other part of life these days, communications have become much more informal than they used to be (think of most business meetings or school classrooms). Maybe that’s why the somewhat formal dance between pilot and controller is particularly intimidating for new pilots. The important thing to remember is that this formality is there for a reason: it saves time on frequency and reduces confusion on a scratchy radio. So the next time you’re stressing about what to say, remember the goal is to be brief and clear. Everything else comes second.