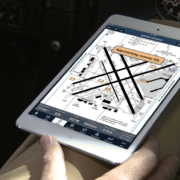 Ask a group of experienced pilots their opinion on how the iPad has changed the way they operate in the cockpit and you’re likely to get a variety of answers depending on what and where they fly. Some marvel at the simple fact that there are no longer paper charts to manage. Others love the display of radar imagery on a moving map during summertime flying, while those flying in the high-country love the terrain and synthetic vision displays.

But there is a less-glamourous phase of flight that the iPad has significantly improved, which many may not consider: taxiing around the airport.

During my private pilot training, the most stressful and task-saturated event was right after touchdown at tower-controlled airports when I had to determine my location and call ground control for a taxi clearance, all while completing the after-landing checklist. Inevitably the ground controller would read back a clearance with five or six taxiways and a few locations to hold-short to make sure I was on my toes.

On a good day, I had planned ahead and printed out the large taxiway diagram from AOPA’s website and highlighted the FBO or parking area on the chart. There were equally as many days where I found myself fumbling through the A/FD while taxiing off the runway, scrambling to find the airport diagram and some semblance of a parking area or FBO noted on the chart.

Fast forward to the age of the iPad, where aviation apps show your location right on the airport diagram as you move about the airport using GPS. This basic feature alone is worth the price of admission for those who regularly operate in and out of large airports, but there’s so much more they can offer to improve your surface situational awareness. The trick is knowing where to look and taking the time to tweak a few settings. Here are six ways you can use your iPad to improve your situational awareness before takeoff and after landing on your next flight.

Geo-referenced airport diagrams for all airports – We’re all familiar with the standard FAA airport diagrams published for tower-controlled airports, but many apps like ForeFlight, Garmin Pilot and FlyQ also include custom airport diagrams for the thousands of smaller airports across the U.S. These are drawn to scale and will display your position on the taxiways and ramp areas surrounding the hangars, just like you’d see on the FAA diagram. In addition to studying these diagrams during preflight, you’ll really appreciate the detail after landing at an unfamiliar airport at night to help locate the parking area and while taxiing along unlit taxiways.

NOTAMs on Airport Diagrams – There are two things that will change on just about every flight: weather and NOTAMs. While the weather reports, forecasts and briefing tools are front and center on most flight planning websites and apps, NOTAMs seem to be tucked away and easily overlooked. To help increase the chances that you’ll actually examine the NOTAMs before a flight, apps such as ForeFlight put the airport NOTAMs on the airport diagram with a conspicuous red button that says “Tap to view NOTAMs.” This displays the pertinent taxiway and runway closures in a location that would be tough to miss: on the chart! You’ll also see a “Runways Closed” banner on the Airports page to help get your attention. With this enhancement, there are no excuses for not knowing about a closed runway or when the runway lights are inoperative.

Airport Diagram overlays – Back in the paper chart era, most pilots got in the habit of marking up their sectionals and airport diagrams with highlighters and notes to call out important features for easy reference in the airplane. Now, most apps offer this same capability with digital annotation tools that allow you to highlight and write notes on the screen with your finger. For example, after reviewing the NOTAMs, use the red pen tool to note any closed taxiways or runways and circle the FBO location. Most of the apps provide identification labels on the diagram, eliminating any confusion about where you need to go after landing.

Runway verification – There have been many cases over the years of pilots landing on the incorrect runway and sometimes even at the wrong airport. To increase your situational awareness during the approach and landing, enable the extended centerline overlay (ForeFlight users can find this in the Map settings menu), which will draw a five-mile extended centerline labeled with the runway number. In addition to helping you plan your traffic pattern and final approach, it’ll allow you to verify with a quick glance that you’re indeed lined up with the assigned runway (and not the parallel next to it). You can take this a step further if your app has synthetic vision, by seeing the runway layout ahead of you in the 3D view. This can be a big help in reduced visibility conditions.

Auto-show taxi diagram – Most apps include a feature that will automatically display the airport diagram on your iPad as you decelerate after landing. This is a tremendous help as it minimizes the heads-down time required to find the chart at a critical point after landing. It’ll just take a quick glance down at your iPad after landing to see your location, making it much easier to follow the taxi instructions from the ground controller. Check the main settings section of your app to verify the feature is enabled.

Runway alerts – This safety tool is unique to ForeFlight and displays a visual pop-up alert and audio warning to get your attention as you taxi near a runway. As you taxi across the hold short line and enter the runway, you’ll get another visual and aural alert stating the runway number and how many feet of runway remain from your current position. In addition to confirming the runway number, it’s reassuring to hear the runway distance remaining from your present position, especially when ATC clears you for an intersection departure. If your headset supports Bluetooth audio, pair your headset to your iPad to better hear these alerts–it’s like having a digital copilot.