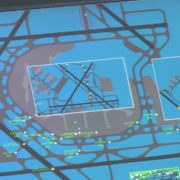 It’s quite normal to be nervous the first time you tune in a new ATC frequency and call the control tower to request a landing clearance, or when you request flight following from the approach controller on a cross-country. Fortunately, as with most skills in aviation, you’ll soon feel comfortable with these procedures after some practice and coaching from your instructor.

You’ll find that it’s also helpful to have a good understanding of the air traffic system from the controller’s perspective. While it may have all started with a controller standing on an elevated platform with a pair of binoculars, today’s system is heavily dependent on advanced technology. Understanding the systems involved will not only make you feel more comfortable working with ATC but will also allow you to take full advantage of all the services and information they have to offer.

Let’s first take a look at the ground controllers, who are in charge of directing traffic along the taxiways at towered airports. They are typically positioned in the control tower and visually track your position.

At larger airports, though, it can be tough for them to see you from the tower when the end of the runway may be several miles away. These larger airports have Surface Movement Radar (SMR), such as ASDE-3, AMASS, or ASDE-X, designed to display the location of aircraft and vehicles on the ground. These are used by the ground controllers as an additional tool to track ground traffic, particularly at night or in poor visibility. Older systems will display a map of the airport and the target:

Newer systems include the capability to display higher quality mapping, radar target, data blocks, safety alerts, and to interface with other systems such as digital flight strips:

The newer ASDE-X systems rely on your transponder for positive identification, so it’s important that you follow the instructions on the airport diagram and set it to altitude reporting mode when taxiing on the surface.

As a pilot, it can be helpful to understand what the controller sees on his display while talking to you on the frequency. There will be a data block associated with your aircraft’s location on the screen that moves as the aircraft moves through the airspace. The data block includes the aircraft N#, altitude, groundspeed, destination airport and aircraft type.

For unidentified VFR aircraft flying near the TRACON airspace, the controller will only be able to see the groundspeed and altitude (if equipped with an altitude-reporting transponder). The controller will use the term “unverified” when issuing traffic advisories.

If an extenuating circumstance requires you to squawk one of the special transponder codes, your aircraft data block will be highlighted with special codes. In this example an airplane is squawking 7700, as denoted by the red letters “EM”, standing for emergency, above the data block.

Many approach radar systems also display real-time precipitation and intensity levels on the screen in relation to aircraft location. Don’t hesitate to ask the controller about what they’re seeing and if they have a recommendation for a route that avoids nearby precipitation or thunderstorms. In addition to using the radar system to track the location of aircraft, many TRACONs are also receiving a traffic feed from the Automatic Dependent Surveillance-Broadcast (ADS-B) system. Instead of using ground-based radar to determine aircraft position, ADS-B relies on aircraft equipped with new GPS transponders, which report precise 3D position data to a nationwide network of ADS-B towers on the ground. This ADS-B traffic information is then sent to each Air Traffic Control facility and will soon be the primary source of air traffic data.

Talking to the tower

At smaller ATC tower-controlled airports, the controllers must visually identify the location of inbound aircraft and often use binoculars to help spot traffic. For this reason, it’s important that you make accurate position reports to the controllers to help them establish an accurate mental picture of the traffic around the airport.

While Class D airport towers typically don’t have a radar service located right on the field, those that are near a Class C or B airport may have a direct feed from that radar to help with identifying traffic. While they are not authorized to issue VFR airplanes a unique transponder code, they may ask you to “IDENT” on the transponder to help identify your airplane’s position on the radar screen.

From a weather perspective, tower controllers at many Class B airports also have access to information from a supplemental weather resource called Terminal Doppler Weather Radar, or TDWR. These are radars specifically designed to detect wind shear and microburst events near major airports and provide controllers with high-resolution precipitation data. There are 45 operational TDWRs in the United States, primarily near large, international airports where thunderstorms occur numerous times each year.

Controllers have access to this TDWR data on dedicated display terminals, which can assist in determining the optimum traffic flow during periods of rapidly changing inclement weather.

Want to take the next step in expanding your ATC knowledge? Take the time to visit your local ATC tower, TRACON or center facility. You’re going to be working closely with the controllers on the radio and it really helps the relationship to meet and talk with them in person.

Controllers will, when you go into a tower, a TRACON, or center for a visit, go out of their way to explain anything that you ask about. And when you are flying, talking with them over the radio, they will do everything they can to accommodate any request that you make.

Call and tell them you are a pilot and would like to come for a visit. Some have a scheduled program, others will try to handle you on an individual basis. If you are a member of a local flying group, you should be able to get a controller to come to a meeting and talk to the group. Another thing that direct contact with controllers will do is sharpen communication skills. Just knowing a few of them makes dealing with all of them a more relaxed affair.