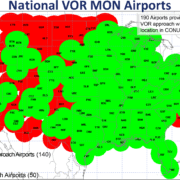 Today, many pilots navigate using GPS as their primary navigation source. There are older navigation systems such as NDB and VOR that continue to have a place in today’s National Airspace System (NAS) but whose prominence is beginning to fade. I am calling these legacy navigation systems and the point of this post is to explain what is happening to them.

On July 26th, 2016, the FAA published a rule to plan for establishing a VOR Minimum Operational Network (MON).  The essence of this rule was to define the criteria for the MON and define a plan for decommissioning over 300 VORs by the end of Fiscal Year 2025 that aren’t required for the MON.  This decommissioning process and MON establishment is intended to reduce the system maintenance costs as the NAS transitions to performance-based navigation (PBN) as a part of the Next Generation Air Transportation System (NextGen).

The following criteria were used by the FAA to determine which VORs would be retained as a part of the MON:

In addition to the criteria above, the following was also considered:

Decommissioning will occur in two phases.  Phase 1, from now until FY2020, is anticipated to see the removal of 74 VORs.  Phase 2, from FY2020 to FY2025, will see an additional 234 VORs decommissioned.  As VORs are decommissioned, changes to the NAS and Air Traffic Service (ATS) routes may occur.  These changes will be addressed by additional NPRMs.

The images above are from a presentation at the Aeronautical Charting Forum (ACF), April 29, 2015, given by Leonixa Salcedo, VOR MON Program Manager for the FAA.

For additional information on this program, refer to Federal Register Document 81 FR 48694 or the AOPA briefing on the subject.

The VOR MON is considered the backup to the Global Navigation Satellite System (GNSS) if that system should become unusable for any reason.  Because it is the backup system, pilot need to know how to use this system in case the primary system should ever fail or the aircraft that they are flying is not capable of utilizing the GNSS.

While you may not need to learn about VORs with the depth that we once did, you should learn about the limitations of VOR systems as well as how to tune & identify them, determine current position, and intercept & track a desired course to or bearing from the station.

NDB & ADF questions have been removed from the FAA knowledge exams but these systems do still exist and you should understand the basics of using these as well.

As of this writing, there are just over 500 NDB approaches left in the NAS.  These are based upon at least as many actual NDB stations.  Many stations still exist that once had an approach but have not been decommissioned.

A few NDB based colored airways do still exist off the coast of NC, within the Florida Keys, and in Alaska but they are a very rare occurrence.

Again, the depth with which we once covered NDB & ADF operations is no longer required but you should understand the basic concepts associated with these systems.  If you are an instrument pilot or working on your instrument rating and the aircraft is so equipped, a few practice approaches using this technology will truly make you appreciate the magenta line within modern navigators.