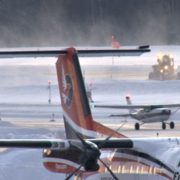 I began my flight training and earned my first pilot certificate more than 16 years ago, but at that time, in the early 2000s, there was a lot of change taking place in the tech industry. The dot-coms were exploding (literally and figuratively), WiFi was becoming mainstream, and GPS was well on its way to establishing itself as the new way to navigate.

While all this progress was being made in normal society, I couldn’t help but get the feeling that certain aspects of aviation were stuck in time. The area that stood out the most to me was both the format and delivery method that pilots relied on for getting preflight weather and updates on airport conditions.

While I soon learned to appreciate the coded format of METARs and TAFs for quick reading, other reports like NOTAMs, Area Forecasts and text AIRMETs/SIGMETs were beyond cryptic. Student pilots and flight instructors around the airport prided themselves on knowing obscure abbreviations and codings that had little to no benefit when it came to what really mattered.

Fast forward to today, where most of us get graphical weather briefings on iPads, in-flight datalink weather is the norm and text Area Forecasts are nearly a thing of the past. NOTAMs have gotten better (especially with how some apps display them right on the chart), but there is still work to be done there to make these important notices both easier to access and read.

My other major complaint was with how the FAA relayed runway and taxiway surface conditions to pilots during the winter months. An important consideration when planning a flight to an airport at below freezing temperatures is the possibility of snow or ice on the runway and whether the conditions are suitable for your particular airplane and operation.

Up until recently U.S. airports expressed braking action in NOTAMs using a MU friction value that ranged from 0.40 down towards 0, where the lower the # meant the higher likelihood you would go ice skating down the runway. It always struck me as odd that they’d publish a non-relatable decimal value in the airport NOTAMs and expect pilots to make sense of it. Every time I came across one of the reports during the winter months I had to use Google to decode the report. For example:

Unfortunately, it took a runway overrun accident by a Boeing 737 at Chicago Midway airport in 2005 for the FAA to take a look at ways to improve the assessment of runway conditions and find better ways to report the status to pilots. The new system uses a matrix with clearly defined condition criteria and Runway Condition Codes (RwyCC) that range in value from 6 (dry pavement) to 0 (hang on for a wild ride).

Airport operators will use the matrix to assess paved runway surfaces, report contaminants present, and through the assistance of the Federal NOTAM System, determine the numerical Runway Condition Codes (RwyCC) based on the runway condition. Pilots can then use the code to assess the effects of a given contaminant(s) as indicated by the associated condition code prior to landing or departing.

The other big change is that airports can no long report a “Nil” braking action for an active runway or taxiway; if conditions warrant this type of report that surface must be closed.

I’d suggest downloading the PDF version of this Matrix and storing it on your iPad for quick reference on the ground and in the airplane: Runway Condition Assessment Matrix