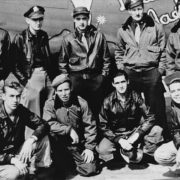 On a blustery, cold morning, back before I knew what lift was, a short freckled face kid strolled into the local airport to take his first airplane ride.

Just about every pilot can recall his first flight, whether it was for training or for the thrill. As I stepped through that door, I knew right away who was going to be at the helm of our airborne chariot. Sitting with his legs crossed in a chair that had to be left over from a 1950s sitcom, was a man with a leather coat. Not just any coat, it was a pilot’s flight jacket. This “Member’s Only” jacket was reserved for only the finest aviators. Anyone not qualified, would just look silly. Because he possessed that unique ability to guide a piece of metal through the air, he alone could don this leather monster and command the respect of his peers by merely entering a room.

Fast forward 20 years later, one of the first items I bought once I started flight training was a leather flight jacket. I too wanted the prestige that was bestowed upon the elite few that could take to the skies. I couldn’t just walk into the local department store and find this ego boosting apparel. It wasn’t sold to the land-bound common folk. I’m sure if I looked hard enough, I could find a JC Penny or Sears-labeled “Bomber” jacket, but that wouldn’t do justice for this commander of the skies. I needed a coat that a WWII vet would be proud to stand next to. One that would last for decades and keep the battle scars of my dogfights for the entire world to see.

Flight jackets were used out of necessity in WWI

But what makes a Flight Jacket worthy of having that title? Certainly it has to have some distinctive features, but why are they there? I’m sure there wasn’t a Betsy Ross of Flight Jackets who decided that epaulets are cool. To find the origins of flight jackets, you have to turn the clock back to the WWI. Pilots of this era flew in open cockpits. Exposed to the elements, they would wear whatever they could get their hands on to protect them. The U.S. Army officially started the Aviation Clothing Board in 1917. They issued heavy-duty leather jackets with knit cuffs and knit waist bands to help seal out the cold.

During World War II, flight jackets became essential to the well being of the crew. Often flying at altitudes in excess of 25,000 feet where temperatures were well below zero, most aircraft cabins were not insulated. The only way to keep warm was a thick, heavy flight jacket. As time passed, certain crews wanted pen holders or oxygen hose clips or fluffy collars or lighter weight, but the core of the jacket remained thick and warm to protect crews from the harsh elements found at higher altitudes.

Some jackets were decorated with squadron patches or painted. The jackets were issued to more than just flight crews, and became popular with generals. The Army and the Navy each had their own type of jacket. Once the war ended and as these pilot returned home and started careers as airline captains, the jackets lived on and became a symbol of their status. Pilot wannabes (myself included) saw them as a must have to be considered a real pilot.

While considering what to put on your Christmas list, consider a flight jacket to make the aviator – a real flight jacket.