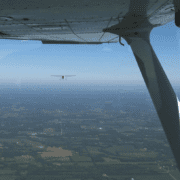 At the beginning of my flight training I remember reviewing the lesson objectives with my flight instructor and what he wanted to cover during those first few hours. Most of the tasks made sense, as they were the building blocks from which more advanced concepts would be based. They included things like flight instruments, airplane controls, checklists, pitch/power, climbs, descents, and collision avoidance.

Wait, collision avoidance? I was really looking forward to doing all of the other flight maneuvers until that topic came up, which brought to mind an image of twisted metal in the sky. Yes sir, I remember thinking, I would like to do whatever it takes to avoid collisions in the sky.

I of course soon learned he was using the FAA/industry buzzword for the process of keeping your eyes out the window and looking for other traffic, but at that time it seemed like a lot of pressure to put on a zero-time student pilot who was still getting used to late afternoon turbulence while trying to maintain altitude. Shouldn’t my experienced CFI worry about making sure we don’t run into anyone while I concentrate on flying the airplane?

Of course this concern quickly passed after 2 or 3 lessons as I started to feel comfortable at the controls, and realized looking out at the window was way more productive than staring at the instruments to control the airplane anyway. I was glad that he taught me this habit early on, and following the law of primacy, it was something that I took seriously on every flight going forward.

Fortunately the odds of ever getting into a mid-air collision are low, as there are on average only about 10 cases per year. The big sky theory is in your favor here too, meaning there is way more empty space out there than aluminum flying around. There are times though that you should be extra cautious, as data shows that about half of the mid-air accidents take place within five miles of the airport when at low altitudes. This makes sense, as it’s the place where the most airplanes are likely concentrated in the airspace system.

This presents a challenge to student pilots though, because it’s also the time when you’re most task-saturated. You’ll need to juggle the steps to configure the airplane for landing, run before-landing checklists, make radio calls, and oh yea, keep an eye out for other airplanes that may or may not be reporting their position in the pattern. This will soon all come naturally to you, but it’s a lot to get used to during the first few lessons.

Fortunately there are some things you can do to give yourself an advantage when it comes to collision avoidance and spotting other traffic:

Fly visually – This first tip is the most important of all listed here. You should be learning to fly the airplane by looking out the window and maintaining various pitch attitudes by the relationship of the airplane’s nose to the horizon. Not only will it make you a better stick and rudder pilot, but it’ll keep your eyes out the window always looking for traffic too.

Don’t get caught up in the FARs – If a potential traffic conflict arises, don’t get too caught up with right-of-way rules to the point that you freeze up and do nothing. Take the course of action that puts the most space between you and the other airplane and save the debate for later.

Clean the windshield – during summertime flying it doesn’t take more than a few hours of low-altitude flying to fill the windshield with smashed bugs. Not only are they annoying to look through, but a bug-filled window makes it increasingly difficult to spot nearby airplanes.

Be methodical and don’t “scan” – Many CFIs and training resources use the term “scan” when describing the method look for nearby traffic. To me scanning involves constantly moving your eyes back and forth, in the same motion that onboard radar sweeps the sky looking for precipitation. This tends to blur the vision and can work against your efforts. Instead follow the FAA’s guidance and concentrate in 10° increments of the sky, and let your eyes rest still in each of those sectors to see if any traffic is in that area.

Light up the airplane – with today’s LED light bulb technology taking the place of the old life-limited incandescent bulbs, there’s no reason not to have all the lights turned on in the pattern and when maneuvering in the practice area, even during the day.

Visualize each radio call – when operating in and around the airport environment, make it a habit to visualize the position for every other aircraft that calls in, even at fields with an ATC tower. With practice you’ll find this will become second-nature and you’ll automatically develop a mental view of the aircraft nearby, making it easier to spot them out the window.

iPad traffic awareness – Technology is also playing an important role in collision avoidance. The NextGen air traffic control system includes a traffic component, that sends out the location of other airplanes via an electronic datalink. You must be equipped with 2 components to receive this traffic data: an ADS-B out transponder, and an ADS-B in receiver and display. The second half of the equation can be as simple as a portable ADS-B receiver and iPad.

Apps like ForeFlight can also display visual and aural alerts on the iPad when a potential traffic threat arises, which will help to limit heads down time starting at the iPad. Here are some more tips for using the traffic feature in ForeFlight on iPad.