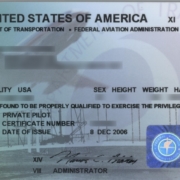 In the middle of January, stories began to trickle out that the FAA had published a new set of rules about changes to the student pilot certificate. With an implementation date indicated as April 1st, 2016, and no notice that we could recall here at Sporty’s Academy, we thought that it might be an April Fools prank. It was few days later that the notice of a final rule finally appeared on the FAA’s Recently Published Rulemaking site and we found out that it was true.

The final rule was real and it will take effect on April 1st, 2016.

Students who have a paper student pilot certificate prior to April 1st may continue to use this until it expires or the student has earned a rating.

Prior to this new bureaucratic process, a new student was vetted by his or her flight instructor to ensure that the student was a U.S. Citizen before beginning flight training. If not a U.S. Citizen, then a TSA process ensued. While this vetting by the instructor does not go away, another layer of bureaucracy has been added to the mix. The TSA will supposedly be checking all applicants against some internal process.

The claim from the Federal Government is that student pilot certificates will be issued within 3 weeks. We’ll have to wait and see how true this is. It currently takes the FAA 2-4 months to issue a permanent plastic pilot certificate for a pilot who takes a checkride and is already in the system.

If the government sticks to their claim, 3 weeks doesn’t seem that long to wait and for most students it won’t be. For students pursuing a pilot certificate in an accelerated program, this could delay the student’s solo and slow down the rating. We’ve seen students go from 0 hours to a Recreational Pilot Certificate in as little as 2 weeks. This won’t be an option after April 1st if we apply for the student’s certificate on the day he or she walks through the door. If it takes longer than 3 weeks, many student solos may be delayed, students will be discouraged, and some may decide to take up golf or boating instead.

Beyond the negatives of the new bureaucracy, there are a few positives to the new rule.

First and foremost, plastic student pilot certificates will not have an expiration date. While a student in continuous training rarely had to worry about the expiration, those who took a break during training did have to be concerned.

Second, there is no charge for the plastic student certificate unless a student happens to need a replacement. A replacement will cost $3.00. Some DPE’s used to charge for the service of issuing a student certificate for those without the need for a medical. I would suggest that if someone wants to charge a student for assisting with an application for the new plastic certificate, the student should find someone else qualified to certify the application. There are a lot more people eligible now.

Third, a student now has many more choices for applying for the student pilot certificate. As before, the student can apply for the certificate with the local FAA office, typically called a Flight Standards District Office or FSDO, or with a DPE. After April 1st, the student may also apply with an Airman Certification Representative (ACR) associated with a part 141 pilot school or with his or her own Certified Flight Instructor (CFI). With any of these methods, the student pilot applicant must apply in person with the authorized individual. Good instructors will likely do this free of charge as a part of their service to their clients.

We haven’t been told how we will accept these applications but apparently we, as instructors, will have the ability.

From an instructor point of view, there will be a few changes to our procedures at the time of a student’s first solo and solo cross-country. Endorsements that used to reside on the back of the student pilot certificate will now be placed in the student’s logbook. This will be true if the student has the new plastic certificate or has a carryover paper certificate. Hopefully, Advisory Circular 61-65E Change 1 will be updated soon to address these new endorsements.

Oh, and about this rule being a surprise that none of us could remember, it was issued as a Notice of Proposed Rulemaking, back in 2010. 6 years and several changes made this proposal a fuzzy and distant memory.