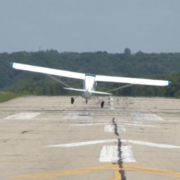 “Sporty’s Clermont County Airport, automated weather observation, 1823 Zulu weather, winds 310 at 13 peak gust 19…wind direction variable 230, 360…” I was turning final for Runway 22 at I69 and made another brief check of the AWOS on Comm2 in the Sporty’s 172LITE I was ferrying back from the paint shop. I knew things were about to get busy. The swirling winds meant a best case scenario of 13 knot winds nearly straight down the runway with only a 2 knot right crosswind to a worse case of nearly 20 knot crosswind from a freshening wind during the round-out and flair for landing.

Hundreds of pages, thousands of blogs and an incalculable number of bulletin board posts have been written on how to consistently land a light aircraft.  Some strongly advocate a “crab approach” and others are just as adamant about the “slip approach.”  This video (below) showing mighty airliners struggling with strong and shifting winds (I don’t know the demonstrated crosswind component of any of the depicted aircraft but this author considers any crosswind whereby the observer can see the left side of the airplane while filming from the right side of the runway, or visa versa, as strong.)  It is important to note that the low slung nacelles housing the engines on many airlines preclude any slip near the ground and their landing gear are designed to survive the tremendous side-loads encountered in a crab to the ground landing.  The GA airplanes we fly likely aren’t.

For us little airplane guys, whether single or twin, tail-dragger or nose-dragger, it is imperative that at the moment the wheels touch the runway, the longitudinal axis of the aircraft is aligned with the ground track and the aircraft is not drifting laterally to the left or the right.  Violating these tenants can result in: 1) Uncomfortable side loads. 2) Premature departure from the runway. 3) Damage to airport equipment –signage, lighting, etc. 4) Landing gear failure. 5) Airframe damage. 6) Any combination of the above causing substantial damage to the pilot’s ego and/or flattening of his or her wallet.

First a little bit of good news.  The winds are almost always more unruly at 500 feet AGL than they are near the ground.  Friction with the ground will encourage the atmosphere to slow down and diminish turbulence.  Any notion of “I can handle this” on short final will likely improve during the round-out and flair with the exception of variable gusting winds that can’t seem to make up their mind which way and how hard they want to blow.

Sir Isaac Newton in the late 1600’s postulated the notion of inertia – an object tends to keep doing whatever it is doing unless acted upon by unbalanced forces.  Now you would think that would mean that once you got the airplane heading straight in a landing it would continue straight down the runway and it would – until you consider the lack of balance in the forces acting upon it.  Lift is decreasing; drag will decrease dramatically as the airplane slows and descends into ground effect; a crosswind means more force is coming at the airplane from one side than the other; and the aircraft’s tendency to weathervane increases as its speed slows and the headwind component fades into the crosswind.

Another consideration is that during a gust, the aircraft will tend to maintain groundspeed causing the airspeed to increase, thus increasing lift.  When the gust subsides, the airspeed will decrease, lift will also decrease and may require a burst of power to prevent the airplane from settling prematurely or forcefully onto the pavement.  Needless to say, a crosswind landing will require the pilot’s full attention and it’s not a time to be engaged in conversation or answering a text.

So how did I handle this landing?  Count me in the crabbing approach enthusiast category.  Although I had no passengers this time, the un-coordinated flight of a slip will have your passengers leaning and wondering what is going on.  Airplanes are built to be stable about the roll axis so why not take advantage of the engineers work for as long as possible?  Besides, whatever control inputs are required to maintain the appropriate slip at 250 feet probably won’t work during the flair.

My airspeed varied widely with the gusts from 55 to 65 knots after extending 20 degrees of flaps.  Normally I am a full flap, full stall landing kind of guy, but reducing flap deflection will increase the stall speed and therefore, landing airspeed.  The aircraft’s ability to land straight on the center line in a crosswind is determined by its rudder effectiveness.  Run out of rudder authority and the airplane will start to turn into the wind regardless of any other control inputs.  Increasing the landing speed will make the rudder more effective until (hopefully) there is enough weight on the tires to provide adequate friction with the runway to keep everything going straight.  The landing flair is NOT the time to be timid with control inputs.

Feel free to go stop to stop with rudder control to keep the airplane’s longitudinal axis aligned with the runway and aileron input to stop any drifting from side to side.  During the flair, looking as far down the runway as possible helps keep the centerline between my knees and everything aligned.  An important part of any landing – especially a stiff crosswind landing – is to be prepared, indeed spring loaded, for a go around.  And a go-around could begin even after you have 1, 2  or 3 wheels on the ground.

From the air the pilot can choose to make another approach and hope the winds are better.  Another option is to find another runway with more favorable winds.  But the go around must be executed at the first sign of control loss.  When the aircraft is heading through the weeds destroying landing lights along the way – all other options are automatically eliminated.

I have done it.  Often pilots have a tendency to relax once the tires are on the pavement.  My tailwheel experience has taught me that the flight is never over until all the parts have quit moving and this adage is applicable to tricycle airplanes as well – especially in a crosswind!

While it is true that tricycle geared airplanes sit on the ground with a near zero angle of attack, the wings can build sufficient lift during a gust to launch back into the air, so the correct flight control position should be vigilantly maintained until you get to the hangar or tie-down (remember to “turn” into a headwind and “dive” away from a tailwind).  Raising any flaps deployed (you may elect to make a no-flap landing in a stiff crosswind) as soon as practical will reduce lift and decrease the chance of a gust taking the airplane (or half of it) airborne.

If you are a student pilot and nearing your check ride, insist to your instructor to devote a lesson (or more) to crosswind landings and takeoffs.  If you are an experienced pilot whose crosswind skills have gotten a bit rusty (if they ever existed), find a flight instructor or trusted mentor to explore your crosswind envelope.  Remember the demonstrated crosswind component listed in the POH is not regulatory, but your FBO or flight school may have rules about exceeding these limits.

Indeed most landings will involve some crosswind.  Honing your technique by landing precisely in the small crosswinds will pay dividends as the winds freshen.   Crosswinds are a fact of piloting life, resolve to become the master of – rather than a slave to them.