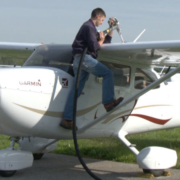 When I turned 16 and first learned to drive a car, I was taught to always be aware of the fuel status. When it was time to go to the gas station and refuel, there was never any thought though about how much gas to put in – insert the nozzle, set the hold function on the lever, and wait for the auto-shutoff to kick in when the tank was full. Why would I consider anything other than a full tank?

The same held true in my experiences in recreational boating. After heading back to the marina to refuel, I left with nothing short of a full tank. I used the same logic as when fueling my car – I could run the engine a longer time with less visits to the gas station. There was nothing else to consider.

When I learned to fly an airplane though I quickly learned that I needed to throw that logic out the window. Airplanes are more sensitive to weight and loading, and more often than not can’t be operated with the tanks full of fuel on every flight. Every airplane has a limiting maximum takeoff weight specified by the manufacturer, and you’re legally obligated to follow it (common sense should tell you it’s a good idea too).  Flying over a manufacturer’s maximum weight leads to degraded performance in flight, and that’s assuming you’re able to get the aircraft safely off the ground in the first place.

Payload in training aircraft varies a good deal between different models. A Cessna 172R Skyhawk, for example, can carry around 450 lbs of passengers and bags with a full load of 53 gallons in the tanks, yielding nearly 5 hours of flying time. That’s pretty generous, considering it would be a challenge for a pilot, training gear and flight instructor to exceed this limit (that might help explain why the Skyhawk is one of the most popular training aircraft ever built). What if you want to take more gear, or another passenger on the flight though? The simple answer is to depart with less than full tanks. If you need to take along an extra 120 pounds, have the tanks filled up to only 30 gallons — this still provides over 2 ½ hours of flying time with reserves.

As you move up to larger aircraft, you’ll find the same principles apply. While you might think that a high-performance jet can carry a full passenger load and still fly with full fuel, that’s not always the case. In fact many jets filled to the brim with jet fuel can only carry 2 pilot crewmembers and maybe a passenger or two before reaching the weight limit. Even if there isn’t a full passenger or cargo load, it’s still not efficient for larger transport aircraft to carry more fuel than needed for each flight segment. The extra weight decreases performance and will increase the amount of fuel needed to complete flight. One exception here is when there is a considerable fuel price difference between the airports of intended use.

Take fuel planning seriously throughout your flight training. Even if you’re flying a C172 loaded full with 5 hours of fuel for every lesson, pay attention to how you manage the fuel. Lean properly on the ground and in the air according to the guidance in the POH, and mentally note the fuel burned for each flight during shutdown. That way when it’s time to maximize the performance of the airplane for longer trips or taking additional passengers, you’ll be very knowledgeable about the expected fuel burn, and can confidently plan to arrive with your required fuel minimums. You’ll also have the right mindset for flying other aircraft that don’t offer the luxury of providing a large payload with the tanks topped off.