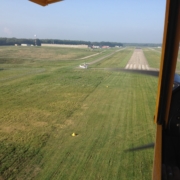 On a recent morning while hangar flying with some colleagues, we were engaged in a heated debate on pattern entries and what is considered appropriate. Most pilots are taught pattern entries during their training and a 45 degree entry to the upwind or downwind leg seemed to be the most commonly taught. If consulting the Aeronautical Information Manual (AIM), you’ll note only one recommendation for pattern entry, that being in level flight, abeam the midpoint of the runway, at pattern altitude. But is this safer than shooting a straight in approach?

As background, Sporty’s is based at an active general aviation airport just east of Cincinnati, Ohio and is home to nearly 150 small aircraft including a busy flight school. As such, it’s not uncommon for as many as three aircraft to be mixing it up in the pattern with two more awaiting a window of opportunity to depart. But we also have moments of blissful isolation when it feels as if you have the entire airport environment to yourself.

While some remain staunch supporters of patterns and appropriate entries no matter the circumstances, I make a case for straight in approaches for landings in certain situations. Before you revoke my license and feed me to the tigers, hear me out. In aviation, there is no shortage of risk management debates. Flying is an inherently risky business. Accepting and managing these risks is a big part of what we do when we take to the air.

We are more likely to encounter other traffic around the airport environment as opposed to enroute cross-country flying at 7,500 feet. While some say that this is the reason we must fly a full pattern at non-towered fields so to give us the best opportunity for predictability and to see and avoid other traffic, I propose an alternate solution.

Flying a 45-degree entry to upwind followed by a complete circuit around the pattern will take approximately 4-6 minutes at most small airports.  Given that the airport environment has the most traffic congestion, should we not try to minimize this exposure by minimizing our time in this environment? A straight in approach reduces your exposure to well under a minute.

Obviously, there are other factors that come in to play. There isn’t a one size fits all solution. If there are four airplanes already in the traffic pattern and two waiting to take off, a straight in pattern might make you the least popular pilot around the coffee pot in the lobby of the FBO; however, in situations when there are no aircraft in the pattern, none waiting to take off, and you are already flying from an area where a straight in approach would be the most efficient method of entry, why not take the most efficient route to landing?

Doing so will free up the airspace for others coming in to land and also results in less low-level maneuvering. Add in an active traffic avoidance system along with announced intentions/position reports on CTAF, and we might find that the straight in approach is a safer solution. I would emphasize that making a straight in approach takes experience and practice as you certainly won’t have the same visual cues and checkpoints as you would flying a standard pattern. Keep your options open and discuss various circumstances with your instructor. You may be glad you did.