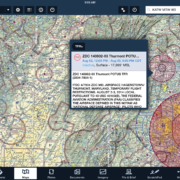 We’ve been fortunate over the past few years that the number of presidential Temporary Flight Restrictions (TFRs) has been fairly limited. That will inevitably change though this fall, as events in preparation for to the 2016 election season begin to ramp up and the president starts to travel more domestically.

While TFRs can be established for a variety of security purposes, presidential TFRs tend to be the most common and restrictive type. These typically restrict all flight training operations within a 10 or 12 NM radius area around the area where the president is visiting, and extend from the surface to 17,999 feet MSL (this zone is commonly called the inner core). An outer ring then extends around the inner core out to 30 NM, and requires all aircraft to be on an IFR or VFR flight plan, be on a discrete transponder code and be in contact with ATC. You’ll also see smaller TFRs established for other VIPs which typically extend 3 miles out from the center of the visit and up to 3,000 feet AGL.

TFR awareness is towards the top of my priority list during flight planning. With today’s multiple forms of electronic communication and flight planning services there’s no excuse for not being aware of a TFR. Here’s a list of resources to make sure a TFR never sneaks up on you.

Calling FSS at 1-800-WX-BRIEF or getting a briefing at www.1800wxbrief.com is one of the best way to make sure you’re getting the most current TFR information for your route of flight. And if the briefer doesn’t mention anything about TFRs during the briefing, make it a point to if at the end of the call to verify that there are none scheduled anywhere near your planned flight.

The FAA’s official TFR website is available at tfr.faa.gov. While this isn’t the most user-friendly website out there, the fact that it comes right from the source and doesn’t rely on third party dissemination adds some value. The easiest way to use this site it is to first zoom into the TFR map for the area you’ll be flying (TFRs are shown with red lines), and then select a TFR from the list below the map for all the details.

One of the benefits from signing up for an account at the FAA Safety Team (FAASTeam) website is the automatic email notifications, including an option to receive alerts for upcoming VIP Movement and their associated TFRs. After signing up for a free account at www.faasafety.gov, click on your email address in the upper right of the screen and select My Preferences and Profile. Here you can specify email options, and you’ll want to check the box next to Selected ATC Notices to receive the TFR alerts. One thing to point out is you will only receive alerts for the region around your zip code, so you won’t get notices for the entire country.

If you’re an Aircraft Owners and Pilots Association (AOPA) member, I’d recommend signing up to receive their TFR email notifications. To get on the list, log in to the My Account section of the website, and select Opt-In Choices under the Profile Information section of the page. Next select the option to opt-in for Airspace (TFR) alerts.  These typically arrive around the same time as the FAA Safety email alerts and have helpful links to both the AOPA & FAA websites for more information.

Apps like ForeFlight display TFRs right on the moving map for quick reference.

Many iPhone, iPad and Android aviation apps incorporate TFR maps and descriptions into their flight planning tools, which is especially helpful since many of us carry these devices with us everywhere we go. I find the ForeFlight Mobile and Garmin Pilot apps especially useful, since they allow you to overlay the TFRs on VFR Sectionals and IFR En Route charts, making it easy to see what airports are affected and how to plan around the restricted area. ForeFlight also depicts up-to-date stadium TFRs on the map and even provides the details about the particular sporting event including the teams involved and scheduled start time.

Twitter is one of my favorite ways to stay up on current events, and it’s also a great way to keep up on TFRs. One source to follow is the FAA twitter feed (@FAANews), but I find that the TFR info often gets lost with all their other news postings. While not an official source, I like to keep a close eye on the VIP TFR Info feed (@VIP_TFR), which only posts tweets on TFRs and includes a direct link to the official NOTAM on the FAA’s site.

Portable ADS-B receivers are the hottest gadget in aviation right now, mainly because they offer subscription-free weather in the cockpit and work with the iPad. In addition to providing NEXRAD radar and text weather products, ADS-B also provides near real-time TFR updates in the air. For example when using the wireless Stratus ADS-B weather receiver with ForeFlight Mobile on the iPad, you can see the TFR boundaries depicted on VFR/IFR charts along with your route. This provides great peace of mind in the air to complement the briefings you received on the ground.