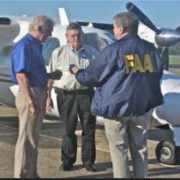 Maybe it was skirting the edge of that Class B airspace or inadvertently overflying a college football stadium within an hour of kick off.  The event was over as fast as it began.  You’re quick to dismiss what seemed the innocuous event as there was no observed traffic within sight and you didn’t hear a word about it on the local approach frequency – no harm, no foul.  But weeks, if not months later, you receive the dreaded letter that no pilot wants to receive. You’re the subject of an FAA investigation.  Now what?

The letter is from an FAA Safety Inspector based at your local Flight Standards District Office (FSDO).  He states the purpose of the letter, description of the particular event, and as required, informs you that you’re the subject of an investigation. It’s worth noting that I count among my closest friends in aviation, FAA Safety Inspectors.  They are pilots just like us – flight instructors, aircraft owners and students with similar backgrounds and a passion for aviation that unites us.  That being said, FAA Safety Inspectors have a job to do which is primarily to protect the general public.  And in that capacity, they are bound to investigate suspected FAR violations.

Your first response to such an inquiry can be significant in the course of action an Inspector may choose; however, it’s always advisable to seek some level of counsel ahead of providing an official response.  In these cases, having the resources available of a program such as the AOPA Legal Services will more than pay for itself.  It would also be advisable to file a report, within 10 days of the event, with the Aviation Safety Reporting System (ASRS).  This report is also known as a NASA Report, and should be filed any time you are involved or witness an event with significant safety implications – including a potential violation.

The ASRS was established in 1975 under an agreement between the FAA and NASA by which the FAA provides most of the funding for the program and NASA serves as the independent administrator.  As administrator, NASA collects, analyzes, and responds to the voluntarily submitted safety incident reports which can be submitted by pilots, controllers, flight attendants, mechanics, ground personnel and anyone involved in aviation operations.

The reports are used to describe safety related matters and, in turn, identify deficiencies and discrepancies to support policy formulation and planning and ultimately make the aviation system better.  Reports can be submitted online at asrs.arc.nasa.gov.

When a report is received it is de-identified before being entered into the incident database.  During this process, personal and organizational names are removed and dates, times, and related information are generalized or eliminated.  The most important aspect of the program is that proof of report submission can be used for sanction (not enforcement) immunity.

Yes, by regulation, FAA will not use ASRS information in enforcement actions (14 CFR 91.25).  Fines and penalties are waived for unintentional violations of federal aviation statutes and regulations.  Notable limitation of the immunity are:

Enforcement actions at the disposal of your local Inspector include an administrative action, reexamination, certificate action, revocation or suspension, civil penalty (typically for organizations) or criminal action.

The reexamination option is technically not an enforcement action although it essentially serves the same purpose.  You’ll often here the reexamination process described as a “709 ride” which refers to the U.S. code granting the authority of the FAA to take such action.  The reexamination can occur anytime reasonable ground exists but generally would occur after an accident, incident or suspected FAR violation according the Inspector’s Handbook.  It’s worth noting that the reexaminations have a very low failure rate and if successful, result in no official airman record.

Certificate suspension or revocations are reserved for serious FAR violations indicative of lack of technical proficiency or qualification deemed too serious to remedy through reexamination or administrative action.

Of course, as pilots, we would much prefer, and should strive to avoid the FAA investigative or enforcement process.  But we’re all human and mistakes can be made so an important point is that the process is generally fair and can even be a positive, productive learning experience.  Remember, if in doubt to the proper response of an FAA investigation, or if concerns exist as to the ramifications of an enforcement action, always take the time to seek out expert advice.