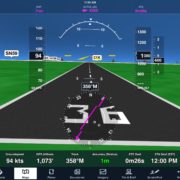 A mere 10 years ago, aircraft were still being manufactured with round (traditional) gauges originally designed for steam engines.  Think about the technology in an altimeter.  By simply measuring the difference in pressure, two small needles spin around to show you your height above mean sea level (MSL).  This simple device is hardly accurate, but we’ve been using it forever so we’ll keep using it forever.

Fast forward to just five years ago and glass displays were becoming common in cockpits from airliners to general aviation aircraft.  The costs were relatively low compared to the circle gauges of the past.  You want five gauges in one? No problem – sign here and write a check is all it takes.

Then comes the iPad – a revolutionary electronic tablet made for mass consumers.  Surely, this $500 magic device that can be bought at Walmart and many other big box retailers can’t be accurate enough for aviation. After all, we aviators take special pride in buying an alternator with an FAA stamp of approval for five times the amount for the same piece of equipment without the FAA blessing.

yes, it is that good!

I contend that even the iPad alone is an extremely capable tool, but now we even have the ability to integrate the device with all sorts of good things.  I can get real-time weather, charts, airport information, waypoints, terrain alerts, runway incursion prevention, flight computer calculations, electronic logbook, glide paths to nearest airports, traffic, engine gauges, AHRS data, GPS position, ADS-B and a lot of other acronyms that few people (including me) understand.  The best part though, are that these systems are dramatically less expensive than the Glass Cockpit movement from five years ago.

So what happens to the gauges?  We have the capability for a usable replacement for every gauge in the traditional cockpit to be displayed on one small, electronic screen.  And now that this incredible device can fit in the palm of your hand, could we start with a clean sheet of paper for cockpit design – maybe.  I’m sure there are others that are already imagining a new generation of flight deck and aircraft design made possible with “iPad technology.”  It’s fun to cast old design concepts aside  dictated in some respects to what no longer holds true.

When will a major aircraft manufacturer replace 90% of the gauges with nothing but a RAM iPad mount? Can we turn a Beach Baron into something that looks more like a helicopter bubble with wings?  How about an airliner where the passengers sit up front? What if we went all Wright Brothers and flew the plane while lying on our stomach?  The answer is I’m not sure and likely no time soon, but it’s fun to imagine what could be.  Super Man would probably approve.