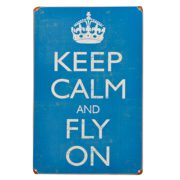 One of aviation’s defining characteristics is its acronyms. FAR, ILS, PTS, WAAS and hundreds more fill our flying conversations, and often confuse new pilots. At the risk of adding to the confusion, I’d like to suggest one more, but it won’t be on the Knowledge Test. FTFA, loosely translated as Fly The Freakin’ Airplane, has come in handy dozens of times over the course of my flying career.

This phrase was a favorite suggestion from one of my early flight instructors, and it while it may sound simple, that’s actually the beauty of it. I’ve found myself saying it to myself (yes, out loud) during emergencies, stressful situations and maximum performance maneuvers – as a way of forcing myself to focus on the basics.

Most recently, I was flying three colleagues in a Piper Aztec when the right-side door popped open during climbout. This is not a critical safety problem, but it does require a landing before the door can be closed again and it’s certainly distracting. During the five minutes it took to turn around and land, it was tempting to try to multi-task by holding the door or talking to the passengers. But I quickly felt myself losing focus, so I gently reminded myself to FTFA. Or as my instructor said one day when explaining his acronym, “forget navigate and communicate; just aviate!”

This advice is as valuable for experienced pilots as new ones. A rash of airline incidents and accidents lately prove that even the pros can get so focused on programming the avionics or talking on the radio that they lose track of the airplane. In one scary incident, a Boeing 757 in England was asked to do a go-around, but while adjusting the autopilot and flaps, the pilots nearly lost control of the airplane. Read the full report – it’s scary but educational reading.

It’s a good reminder that even the smallest things can get us out of our rhythm, and put our brain into a state where it’s doing more harm than good. The “fight or flight” response kicks in and a rush of adrenaline can make us all do silly things. In the case of the 757, the pilots didn’t even do anything wrong at first, but were disrupted by events on the ground. Any change from the normal flow should make your a little paranoid – it’s a good time to say FTFA.

This is also a helpful concept to remember on a long cross country, when everything seems to be going smoothly. During times like this, it’s easy to slip into complacency or lose your edge just a bit, and sophisticated autopilots only reinforce bad habits. A recent study on the subject showed that pilots aren’t so bad at physically flying the airplane, but their ability to keep situational awareness is worn down by the continued use of automation. In this case, FTFA isn’t necessarily a reminder to put your hands on the controls, but rather to keep your head in the game: do you know where you are, where you’re going and what your Plan B is?

It’s important not to confuse this philosophy with aggressiveness. By telling yourself to fly the airplane, you’re actually trying to do less, not more. So resist the urge to flip switches and make radical control inputs. If something happens and the adrenaline starts pumping, focus on maintaining positive control and take a deep breath. I know one pilot who even wrote “Breathe!” at the top of his emergency checklist.

Which brings up another great acronym: TLAR. When you’re concentrating on FTFA, one trap is to focus too much on specific power settings or airspeeds. Especially if it’s an abnormal situation, don’t stress over 76 knots vs. 75 knots – just shoot for “That Looks About Right.” Save your fine tuning for later, when everything is back to normal.

So the next time you feel overwhelmed by non-stop radio chatter or a red annunciator light, just tell yourself “FTFA!” And yes, it’s OK to say it out loud.