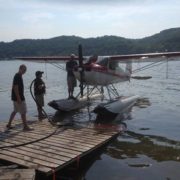 “Are you ready?” asked my instructor, “Because once we start that engine we will be in constant motion until we are back on the ramp.” But he didn’t mean a traditional FBO ramp. No, we were launching from a boat ramp on the Ohio River from Mac’s Seaplane Service in Rising Sun, Indiana.
Is getting a seaplane rating on your bucket list? It had been on mine for several years. I don’t live or work on a lake or river, don’t own a vacation home, and most of my time away from my day job is spent at our land-locked farm tending to the crops, cows and chickens on our little corner of Kentucky. But I have always considered myself to be a lifelong learner. I believe if you are not growing, you’re dying and the growing pile of old boat stuff, SCUBA gear and ski equipment are testament to my desire to tackle new challenges. But my one enduring passion has been flying airplanes and each flying goal met has led to another.

I had scrolled through the listings of seaplane bases and none ever seemed close enough for me to consider. The combination of costs for the flying, instruction, lodging and transportation, plus the week I would be away from the work and farm had kept this class of airplanes just out of my reach. Then last February I was having lunch in Sporty’s Café when I began talking to a customer sitting at a table next to me. Turns out it was Troy MacVey, a retired airline pilot who had started a seaplane base in Rising Sun, just an hour from Sporty’s. Turns out he was working on the last few details (mainly working with the FAA to find a suitable Seaplane Pilot Examiner) for adding pilot training to his list of services.

In August I got a phone call from Judie at Mac’s.  I learned they had found an examiner and if I could schedule the time in the next couple of weeks, my goal of becoming a seaplane pilot could become a reality.  I really did not know what to expect as I journeyed to Rising Sun.  I had flown over the area in the past but usually concentrated on the riverboat casino on the north end of town paying no attention to the community boat ramp and dock a mile or so to the south.  After navigating to the corner of Front and 1st St. I was surprised at the facility.  Troy had built a large hangar and office complex taking advantage of several free parking spaces, a municipal rest room facility, boat ramp, and of course, the river.

Inside the hangar was a Taylorcraft on floats and the Oshkosh Grand Champion Cessna 195 seaplane that has been featured in Flying Magazine.  Pretty airplanes – but more important to me was N72475, one of only three Cessna 140 float planes in existence and my “classroom” for the seaplane rating.

I was anxious to get started but was quickly instructed that the airplane would be a lot easier to preflight while it was still in the hangar.  I learned the airplane had its original Continental C-85 replaced with a more powerful O-290 Lycoming with a special “Borer” prop modification for seaplanes.  I learned new part names like bumper, chine, keel, step, skeg and spray rail.  I saw how the water rudder was attached, how it worked, and how to retract it.  I learned that floats leak and how to sump them and if you do not get any water out, your pump is probably broken.  All of this in addition to the usual preflight of the “normal” airplane systems.

Once the preflight was complete, we used a modified boat trailer to move the aircraft from the hangar to the sea (or in this case – river) and I took off my shoes and socks to don a pair of sandals for the fun part.

When I got my tail wheel endorsement in a Piper Cub the instructor told me that with the door and window open, any checklist would likely get blown out so instead of paper, he had me memorize the acronym CIGARS ((C) Controls – free and correct, (I)Instruments – check, (G)Gas – we have enough and is turned on, (A)Airframe – secure, (R) Runup – engine magneto and carburetor heat check, (S)Straps – seatbelts secure) for our pre-takeoff check.  Sharing a river with pleasure boats, barge tows, wave runners and driftwood while dealing with wind and currents means there is just no time to study a written checklist.  So in addition to CIGARS, we used FFCARS ((F)Fuel – status, (F)Flaps – correct, (C)Carb heat – the little Lycoming being operated in the moist environment can make carb ice like a Fridgidare, (A)Area – clear, water (R)Rudder – up or down as appropriate, (S)Switches – radios, lights). This checklist was recited for every phase of taxi, takeoff, climb, cruise, landing, sailing, beaching, ramping and docking the seaplane.

Books have been written (I recommend Step Up to Floats and Seaplane, Skiplane, and Float/Ski Equipped Helicopter Operations Handbook) on flying seaplanes and is beyond the scope of this article.  For a great overview of the Seaplane rating watch the So You Want to Fly Seaplanes video.  Just prepare to have the airplane time of your life as you learn to step taxi, lift each float out of the water independently to reduce drag, deal with rough water, smooth water, glassy water, confined areas, using carb heat to slow the engine as you approach the dock, turning the mags on and off to further slow the engine, precisely pulling the mixture at just the right time to ensure you make it to the dock or ramp without crashing but without drifting back to “sea” either AND my all-time favorite is literally walking a tightrope stretched between the forward mooring cleats to get from one side of the airplane to the other. I highly recommend removing your watch, wallet and cell phone prior to this maneuver (don’t ask).

After four hours of flying and an equal amount of ground school, the appointment was made for my check ride on September 14th.  Mary Alverson, the designated examiner, had flown down from Minneapolis to conduct five examinations over a three day period.  Fortunately, the weather cooperated. Troy had us prepared and we all passed the demanding check ride to PTS standards.  I have a new rating in my pocket and a new column (Single Engine Seaplane) in my logbook. The leaves are changing and the water has cooled below my comfort level, but next summer I am thinking about again getting seaplane current and taking my bride for a ride in that 195.  I guess I am not too far away from the water to use my seaplane rating after all!