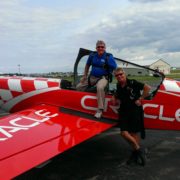 Working at Sporty’s Academy occasionally affords some opportunities that I probably wouldn’t otherwise see.  Last week at AirVenture 2014 in Oshkosh, I was afforded one of those opportunities.  Thanks to the generosity of Sporty’s founder, Hal Shevers, I had the chance to spend some time with another generous aviator, world-renowned aerobatic pilot, Sean D. Tucker.

You may know Sean as one of the best air show pilots in the business, but did you also know that he is the current Young Eagles Chairman?  Sean has held this title since AirVenture 2013 when he took over from Chesley “Sully” Sullenberger and Jeff Skiles.  Only a few people have held this title over the years and Sean is as hard working as they come.

In an August 1st, 2013, article on EAA’s AirVenture news website, Mr. Tucker was quoted as having this to say about his role as chairman:  “I will be the voice, but it’s the men and women who volunteer their time that really make this program so successful,” he says. “I want to honor them; they are the unsung heroes.”

According to the Young Eagles website, more than 1.8 million kids have enjoyed a free flight with one of these volunteer pilots since the program was introduced in 1992.  Over the last 5 years Young Eagles have also received the added benefit of free online access to Sporty’s Learn to Fly course.  This is the same Learn to Fly course that adult students will pay $199.99 to prepare them for the knowledge, oral, and practical exams.  Nearly 27,000 Young Eagles have taken advantage of this benefit meaning that Sporty’s Pilot Shop has given away over $5 million in free courses to youth in the program.

If you are a pilot and you would like to volunteer to fly Young Eagles, contact your local EAA chapter or find out more at YoungEagles.org.  Young Eagles is a great way to give back to the aviation community and perhaps ignite the passion for aviation in a young person in your community.

Speaking of community and igniting passion, Sean uses the Young Eagles program as a stepping stone to further experiences in his own community.  Sean’s passion for the Young Eagles program and the youth of his community are obvious when you talk to him.  In fact, Sean even has a Cessna 152 to allow the underserved and at-risk youth in his community to gain experience up to their first solo flight.  He tells me that the kids must first take a Young Eagles flight and gain access to the Sporty’s Learn to Fly course.  Sean then tells the kids, “do your homework” because they aren’t allow to fly in his program until they get that done.  Sean likes the fact that the Sporty’s course gives the kids and this program a structure to follow.  “It’s not like reinventing the wheel, because you guys have already invented it.”

Sean was telling me about his program as we climbed out to the north of Oshkosh in the Oracle Extra 300L for an aerobatic lesson.  Remember that generosity that I spoke of in the beginning of this article?  It started with Sean donating an aerobatic flight to the Young Eagles auction.  Sporty’s founder, Hal Shevers, placed the winning bid at the auction.  Hal loves to fly and is very passionate about giving to the future of aviation but he prefers to keep the sky over his head when flying.  Hal asked if I would like to go for a flight with Sean and I jumped at the chance.  The generosity of these two aviation legends and the volunteer Young Eagle pilots that they help support should be an inspiration to us all!  Thank you one and all!

Now, I need to go and fly some Young Eagles for my own little part in giving back to aviation.