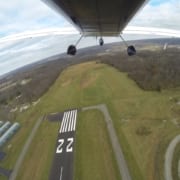 In November, a Boeing 747 that was supposed to deliver parts to McConnell Air Force Base in Wichita, Kansas, landed nine miles north at Col. James Jabara Airport. That airplane was flown by a two-person crew and had no passengers.

In January, a Boeing 737, also flown by a two-person crew, was supposed to have brought 124 passengers from Chicago to the Branson Airport in Missouri, but instead landed five miles north at the M. Graham Clark Downtown Airport in Taney County.

These two recent and very public mishaps involving professional flight crews landing large, transport category airplanes at the wrong airport brought unwanted attention to the aviation community.  Quite likely, you may have even had someone ask you just how a pilot could possibly identify the wrong airport as his intended point of landing.  And you may even opine how many airports have similar layouts, are located close together, are surrounded by featureless terrain, etc.  And you’d be correct.  I would even go a step further and submit that these factors result in airplanes likely landing at wrong airports all over the world on a fairly routine basis.

But thankfully, the best-case scenario typically prevails.  That is, the outcome is simply a little embarrassment because it’s likely only the pilot would be aware of such an occurrence if not under the control of ATC.  But the fact of the matter is, no matter the extenuating circumstances, and no matter how harmless or insignificant the occurrence may be, instances of mistaken identity can always be attributed to pilots and/or other team members (air traffic control, crew members, or even passengers) letting their guard down – something we mustn’t do at the controls of an airplane.

Thankfully, in these very public cases you have read about, crews, passengers and airplanes came out unscathed.  But early in the investigation, it appears certain procedural steps were not followed which could have affected the outcome for the positive.  Some steps you can take in your flying to avoid a similar misstep…

1)      Use your chart – yes, that’s what it’s there for.  As they say, a picture is worth a thousand words and a sectional or terminal area (TAC) chart (even if you’re flying IFR), will offer a wealth of information about airport features and surrounding terrain.  Anticipate the surrounding landscape or other landmarks and ensure that what you are seeing outside matches with what you are positively identifying on the chart.  And like all aeronautical decisions, a body of evidence should be gathered to support your conclusions – never rely on a single source of information.

2)      Use your moving maps and other resources – many of us are flying routinely with GPS, color moving maps, iPhones, iPads and using only a fraction of the capabilities.  Make use of the technology at hand to verify position, time and distance to your intended point of landing as well as surrounding terrain.

If you do not have this capability on the flight deck, access the many resources online including satellite imagery and airport diagrams to help visualize what you should be seeing in the immediate airport vicinity.  This important first step will also help you identify risk factors for your destination (e.g. close by airport with similar layout).

3)      Utilize runway information as a final check – in addition the airplane’s checklist, consider developing your own mental checks for your flights such as an “in-range” check and final approach check.  As part of these mental checks, include verification of runway alignment and the airport environment.  Ensure that runway numbers, heading indicator and anticipated airport layout all make sense.  Ensure the runway length and width you estimate visually coincides with what is published for the airport and that taxiways agree with your pre-planned exit from the runway.  Also for consideration is whether airport lighting systems are in agreement with what is published – approach lights, runway lights and visual approach path indicators (PAPIs, VASIs).

4)      Adhere to a sterile cockpit rule – to aid in your focus and attention to the task at hand, develop and adhere to a sterile cockpit rule.  In the professional world, crew members are prohibited from discussion of anything non-flight related while below 10,000’.  This can easily be modified for general aviation to be in effect at a certain distance from the destination airport below a specific altitude.  An ancillary benefit to the rule is the pilot’s ability to inform passengers ahead of time about the rule or policy so you’re not trying to think or talk over a chatty “back-seater” while maneuvering for the pattern – simply invoke the sterile cockpit rule.

5)      If in doubt, ask!  If the correct airport is in question or if the body of evidence isn’t in 100% agreement, ask for help if possible.  This is not the time to be proud.  By the same token, don’t leave responsibility for positive identification of the appropriate airport to anyone else, including air traffic control.  Everyone is fallible.  In the end, the pilot is at the controls and therefore the final authority and decision maker.