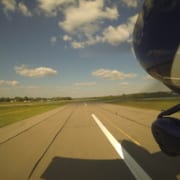 What? Huh? Yes, you read the title correctly. There are many things one might claim I’m an expert in.  “Good landings” is definitely not one of them.  So then, by default, I might be an expert on how to make a bad one.  I haven’t bent any metal, ground looped or seriously scraped a tail, but I’ve had more than a few that made me look around to see if anyone was watching.

It doesn’t take a 50 year professional pilot to point out my landing mistakes.  I know what they are and yet still manage to commit many of the same errors.  They seem to be occurring on a less frequent basis as my experience level grows, but we are creatures of habit and I have a habit of making these five mistakes most often.

While I know the correct method is to be on my target airspeed, when I commit the airspeed error, I’m typically on the high side.   This results in having excess speed when you flare.  I left a lot of usable pavement behind me floating down the runway before one of my instructors solved my issue.  After beating me handily in a spot landing contest, he reinforced the practice of stabilized approach parameters.  Find the target speeds you need to hit on every leg.  Once you have the pitch set for speed, make distance adjustments with the power.  In a Cessna 172, 85 kts on downwind, 75 on base, and 65 on final work really well.

This one is somewhat connected to my first problem.  I often don’t slow down much when transitioning to the traffic pattern.  When abeam the numbers, I typically need to shed more than 20% of my airspeed before the airplane will even think about descending.  The result is often being way too high when turning base which may very well carry over to final approach.  After slipping the airplane during three consecutive final approaches, the pilot in the right seat gave me a pretty good verbal bashing.  He made an excellent suggestion that I follow to this day.  Give yourself a speed limit while you are in the pattern.  Make it no more than 10% higher than your desired “abeam the numbers” speed.  In my 172 case, that means I can’t be faster than 93 knots while in the pattern.  By limiting my pattern speed, getting on the appropriate final approach glide slope has been much easier.

Yes, too high and too fast as described above will result in a flare that looks more like a roller coaster than a landing – and feels like one too.  It took a flight check from a more experienced flight instructor to fix this one.  I describe this with a word of caution because the real takeaway is that the correct fix for any approach outside of your stabilized parameters is a go-around, but minor derivations can still be managed.

Some excess airspeed doesn’t have to result in a balloon.  Is has everything to do with the rate of roundout or flare.  By initiating the roundout earlier and more gradually, it may allow the excess energy to dissipate.  However, this may also require additional runway.  At all times, if not able to land the airplane in the touchdown zone, go around!

Have you ever logged three landings after just one approach?  That’s known as a bounced landing and while efficient for currency, it’s also a mark of a poorly executed landing. The reasoning on why this happen is similar to why my dog doesn’t come when I call her – “she don’t want to.”  The airplane is simply not ready to stop flying because of too much energy.  The correct fix for any bounced landing is to go around.  In the even that the bounce was very minimal and there is plenty of runway remaining, it’s possible to land the airplane normally by adding some power to cushion the subsequent attempt and dissipating the excess energy.  Keep in mind that after a bounced landing, it’s likely that you’re already holding in excess back pressure which will have to be released to recover or execute the go-around.

I’ve found that some of my worst landings were usually after flying straight-in to land rather than flying the full pattern. Even though it’s a pilot-controlled field and a full pattern is not “required”, performing a straight in approach throws off the normal visual clues on where and when we should make the pitch/power adjustments and judge the approach stability. There are plenty of arguments for and against going straight in to land at non-towered fields, but the prudent approach is to complete a full pattern as you generally practice and allow time to get set up properly for a stabilized approach.  And you get to log a few more minutes of flight time!