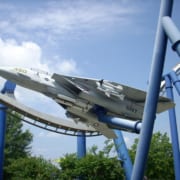 Earlier this year, I wrote about my family’s plans to take a number of mini-vacations during the summer centered on our enjoyment of roller coasters and amusement parks.  Now that the amusement park season is winding down, I am happy to report that we were able to visit six of the twelve amusement parks in the Cedar Fair family this year including all but one in the eastern half of the United States and Canada (maybe another time Dorney Park).

Half of the park visits included the use of a general aviation aircraft as transportation to and from the area but all did not go as originally planned.  The trips required flexibility for them to happen safely.

Good pilot judgment depends on proper planning and the ability to adjust the plans when warranted by the conditions.

One of our trips during the month of June was to Carowinds along the North and South Carolina border; about twenty minutes from the Charlotte Douglas International Airport in Charlotte, North Carolina.  I recounted some of the details regarding this trip in my previous post.

Our plan was to depart the Sporty’s/Clermont County Airport early in the morning for the one day trip.  A detailed review of the weather was in order on the evening before the trip.  There were some storm systems in the Charlotte area that night but they were forecast to be gone by the time we arrived.  All looked good for our flight when we headed for bed.

A review of the weather the next morning showed that the storms were a bit slower to clear than expected but they were dissipating.  By the time we arrived at the airport to board the Piper Aztec, the rain had moved out and we only had some marginal clouds and visibilities with which to contend.  The conditions and forecast were well above my personal minimums so we launched to the southeast.  It was a great flight with a descent through a layer clouds near the Charlotte area.  The approach and landing were performed visually.

As reported before, the trip to the park was quick and easy and the kids enjoyed the day trying out the new coasters and rides.  My mother, who first introduced me to roller coasters back before there were many height limitations, also enjoyed the trip.  The Intimidator and Afterburn coasters were family favorites.

The trip back to Clermont County was smooth and uneventful.

We had planned our day trip to Michigan on a Tuesday near the end of July.  Plans were made, the G1000 equipped Cessna 182 was scheduled, the vacation day was set, and the weather looked questionable when viewed on the Monday before.  While it didn’t look like the trip would be a washout, the forecast called for thunderstorms to pop up along the route and at the destination.  With appropriate planning, an early departure, and weather avoidance equipment, it might have been okay, but who really wants to spend the day worrying about storms.  Time for plan B.

Looking a couple days out to Thursday, the weather looked more promising.  Change the plans, reschedule the airplane, change the vacation day, and hope for the better weather.  The better weather held true.

Thursday dawned bright and sunny.  The route could have been flown under visual flight rules but I elected to file an instrument flight plan anyway.  I just like the added margin of safety with having my ATC “crew” on the ground in a single-pilot operation.

I contemplated flying to Muskegon or Fremont, Michigan.  Muskegon is a tower controlled field with a Terminal Radar Service Area surrounding it.  Fremont is a non-towered field with a nice long runway and instrument approaches.  Researching online, it looked like the drive times to the park would be similar though the drive from Muskegon would be on larger roads.  Ultimately, the rental car convenience and lower fuel price at Fremont won out and I made that our destination.

The flight to Fremont took just over two hours.  It was a relatively smooth flight other than a few bumps as we descended toward the airport.

The drive to the park was a little more complicated than anticipated due to road closures unfamiliar to the GPS but we ultimately made it.  The family enjoyed the day at this smaller Cedar Fair park and I think that the Shivering Timbers roller coaster was worth the trip.

The flight back home was quiet and uneventful from an airplane perspective.  The moon created an amazing fire-like show as it rose into the darkening sky.  Cincinnati Approach welcomed us home like a long lost friend.

Our final big trip of the summer came in early August.  We departed for Niagara Falls, New York, in the Aztec on Sunday evening after my kids and I attended a family reunion and my wife finished her work for the day.  Hotel reservations and a rental car along with initial weather evaluations had been taken care of during the prior week.  Final weather evaluations were completed before departing on this multi-day adventure.

With confidence born in having a second engine and fairly good weather, I elected to take a direct route to Niagara Falls airport.  This put us over Lake Erie for about 85 miles and carried us through the edge of Canadian airspace.  The shores of the lake were always in sight and easily accessible if an emergency were to have occurred.

We hit a line of clouds and some moderate turbulence over the shore near Cleveland but the flight was smooth with good visibility otherwise.

As we approached the Niagara area, Buffalo Approach began to give us vectors to the outer marker for the ILS on runway two eight right.  Since the weather was beautiful and this was our first visit, I asked about the aircraft traffic over the Falls.  He indicated that there was no traffic and provided us a vector to the area for some sight-seeing laps around this natural wonder.  While there is a published procedure with a discrete frequency for VFR flights over Niagara Falls, his instructions were to stay with him, maintain four thousand feet, circle as desired, and advise when ready to proceed to the airport.  What fantastic service from ATC and what a spectacular view!!

We parked the Aztec at Niagara Falls Aviation and they met us at the airplane with our rental car.

We spent the night on the U.S. side of the Falls and did the tourist activities on both sides of the border on Monday.  Monday evening we drove to our next hotel on the north side of Toronto and prepared for our first day at Canada’s Wonderland, bright and early on Tuesday.  Our plan was to spend all of Tuesday and part of Wednesday at the amusement park but the weather outlook for Wednesday didn’t look like it was going to live up to earlier expectations so we took it one day at a time.

Tuesday was a great, though very crowded, day at the park.  Leviathan and Behemoth were coaster favorites of the entire family.  Time Warp was a unique coaster experience that was worth riding at least once.

A review of the weather Tuesday evening made us rethink our planned time at the park on Wednesday.  Storms were going to move in later in the day on Wednesday and our plan was to be home in Ohio by Wednesday evening.  Since we were two hours and a border crossing away from the airplane, it was decided that we should start our drive back to New York early in the morning.  Being at the airport would allow us to better adjust for the weather and it looked like the storms would reach Niagara in the mid afternoon.

Back at the airport and having cell service once again, I looked more closely at the weather.  It turned out that there were two lines of storms.  One was strong and currently impacting our route of flight, the other was weaker and would arrive at our departure point in a couple of hours.  Current conditions at the departure point were very good and it looked like a deviation well west of our desired course would keep us clear of the weather and allow us to reach Clermont County.

Armed with a thorough weather briefing, a plan, and visual conditions supplemented by ADS-B weather to monitor the situation, we launched on our journey home.

The direct flight path home would have taken us into the heart of a line of extreme thunderstorms.  Our new route took us direct to the Sandusky VOR and then south to Clermont; well clear and behind the extreme line.

Passing north of the line we encountered some light precipitation and some light turbulence but the ride wasn’t bad.  Once in the clear and behind the line of storms, I requested a route direct to our destination and received this in short order.  The ADS-B showed some cells of light to moderate precipitation to the west of this route which bore watching but they dissipated soon enough.

Our next encounter with weather came as we approached the Sporty’s/Clermont County Airport.  A low layer of strato-cumulus clouds necessitated flying the instrument approach to runway two two.  Visibility beneath the clouds was good and the landing occurred without an issue.

While we would have liked to have had two days at Canada’s Wonderland, we were happy to be safe and sound and on the ground at home.  The decision to be flexible and leave early was a good one.

Aviation is a great mode of transportation.  General aviation will take you places that aren’t easily accessed and allow you to see things that you can only see from a light aircraft.

But, aviation does require sound pilot judgment and may require some flexibility.

If it is super important that you arrive somewhere at a particular time, then you need to be thorough in your planning.  If the general aviation plan won’t work without exceeding your personal minimums, then make sure that you leave yourself enough time for a plan B or C.  Don’t let “get-there-itis” be your downfall.

Speaking of personal minimums, if you don’t have any, develop some.  There are several tools available for this which may find their way into a future article.  You can also discuss these with your favorite local flight instructor.  Once you have your personal minimums, stick to them!  Review them occasionally during quiet times to see if they need adjusted.  The time to review them for changes in not in the middle of a flight decision.

Go on, get out there and use your pilot rating but be safe so that the most exciting part of your story is at your destination not something read in an NTSB report.