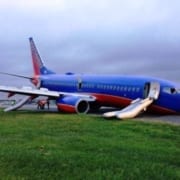 Airmanship can be defined as the ability of a pilot to properly assess the environment in which the aircraft is operating and properly managing that aircraft taking into account both the aircraft’s and the pilot’s capabilities. Recently, there have been a number of high profile accidents that have focused attention on the airmanship of the pilot(s) operating the airplane.  Let’s examine a few of these, determine their relevance to our flying and see if we can improve our airmanship from the mistakes and success of others.

Maintain Thy Airspeed Lest the Earth Will Arise and Smite Thee

On July 6 this year Asiana Airlines Flight 214 was cleared for a visual approach to runway 28L at the San Francisco International Airport (SFO).  At the time of the accident the weather was reported as light winds with visibility unrestricted.  The Instrument Landing System (ILS) for that runway was not operational and a Notice to Airmen (NOTAM) had been issued to that effect.  The Precision Approach Path Indicators (PAPIs) were working to provide glide slope advisories to the crew.  The National Transportation Safety Board (NTSB) has not released its final report, but has provided preliminary findings.

During the last 90 seconds of the flight, the crew disconnected the autopilot and was hand flying the visual approach.  The target approach speed for the Boeing 777 was 137 knots.  During the final seconds of the flight, speed was allowed to decay to 103 knots or 25% below the desired speed.  As a result, the airliner with 307 people on board landed short of the runway shearing the main gear off on the seawall and losing its tail section. The aircraft slid 2400 feet before coming to rest south of the runway. Remarkably only 3 people died as a result of the crash and subsequent fire.

It’s an Airplane, Not a Wheelbarrow

In this age of skid-steer loaders and concrete pumps, you don’t see wheelbarrows around construction sites anymore.  That contraption, with its single “nose wheel” loaded with dirt or concrete, made moving the stuff possible because of the mechanical advantage of its second class lever. But was inherently unstable (we called it wobbly), because the load was significantly top heavy.  The unskilled, despite their brawn, would often dump their cargo short of its destination.  On July 22, Southwest Airlines flight 345 landed nose-gear first causing it to collapse.  The Boeing 737 with 149 on board careened down the runway like an out-of-control wheelbarrow.  16 passengers suffered minor injuries.  The NTSB reports the captain took control of the aircraft from the First Officer (FO) when the airplane was just 400 feet above the ground and seconds before touchdown.

This report indicates nearly half (48.8%) of general aviation accidents occur during approach and landing.  Fortunately, probably because the airplane is travelling slow and is configured for landing, the fatality rate is very low.  So how can we learn from these highly publicized foul ups by highly trained flight crews in high dollar jets with the most modern avionics and flight control systems?  It may all go back to common sense – and airmanship.

I think I am fairly typical for most general aviation pilots.  I will painstakingly stick to the checklist for start-up and run-up,  diligently scan the runway for dogs and deer during the takeoff roll, and have suitable landing sites picked out during the climb should my one and only rubber band decide to break.  At some point, however, complacency will set in.  The engine is running, all the needles are in the green, the ride is smooth and I begin to feel as nothing untoward is going to happen.  I become less diligent.  During approach and landing I may be tired (long flight sitting in one place), dehydrated (pilots often self-dehydrate to avoid any in-flight urges or leaks) and maybe a bit hypoxic.  Everything has gone well to this point and chances are the approach and landing will go well too – until it doesn’t.  Complacency in the approach phase can allow us to get too low, too slow and land too short or be too high, too fast and try to force the aircraft on the ground – nose-wheel first.

As competent pilots we must stay spring-loaded to initiate a go-around.  While a botched approach, especially with passengers on board, may be a blow to our ego, a botched landing can be a more serious blow to our wallet and our certificate.  So prior to every landing, I like to squirm around a little bit, stretch as much as the confines of the cockpit will allow to help get the old blood flowing to my arms, legs and brain.  I like to turn off the auto pilot for a few minutes before I begin the approach – even if I am going to use it on the approach – just to get my body back into “flying mode.”  Prior to calling approach control, or about 10 miles out at a rural airport, I will tell my passengers that I have pilot stuff to do now and turn the intercom to isolate which is my version of the sterile cockpit rule.

I hope I can learn from the mistakes of others.  I try to be especially diligent during the landing – it’s when most accidents occur. Wadding up an airplane is NOT the perfect end to the perfect flight.