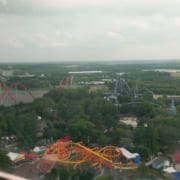 This summer, my family and I have decided to take a number of mini-vacations centered around our enjoyment of roller coasters and amusement parks.

Living in Southwest Ohio, we are close to a top roller coaster destination in a park known as Kings Island.  Kings Island is home to the world record holding wooden coaster known as “The Beast” along with a number of other award winning coasters and rides.  It was the home to one of my favorites, Son of Beast, but alas it is no more, but I digress.  The park is part of the Cedar Fair family of amusement parks which includes the world renowned roller coaster destination, Cedar Point, on the shore of Lake Erie in Northern Ohio.

Since Cedar Fair is a family of parks, they have an option to get a platinum level pass which allows parking and entry at all of their parks.  We decided to opt for that pass this year.

During the month of June, we have had the opportunity to visit 2 parks outside of our home park.

Our first trip during the month of June was to Carowinds along the North and South Carolina border.  Carowinds is located about twenty minutes from the Charlotte Douglas International Airport in Charlotte, North Carolina.  In fact, the park is located due south of the airport along the extended runway centerline for runway 36 center.

Driving to the park would have taken about 7 ½ hours without breaks or stopping for gas but we wanted to visit this new park to us in a single day.  Flying to Charlotte Douglas in a Piper Aztec was a less than 2 hour flight.

We departed the Sporty’s/Clermont County Airport early in the morning and arrived in Charlotte about 45 minutes before the park was scheduled to open.  The kids had barely made a dent in the battery life on their electronic games.

Storm systems had moved through the Charlotte area the night before but we only encountered a layer clouds in the area when we arrived.  Other than some stations reporting marginal weather due to clouds and visibility, there was little to see on the ADS-B supplied weather in the cockpit.

Wilson Air Center had our rental car ready at a great pilot rate and supplied us with directions to the park since my wife and I had both forgotten to grab the auto GPS from our van in Ohio.

The trip to the park was quick and easy and the kids enjoyed the day trying out the new coasters and rides.  My mother, who first introduced me to roller coasters back before there were many height limitations, also enjoyed the trip.  The Intimidator and Afterburn coasters were family favorites.

The trip back to Clermont County was smooth and uneventful, which is how I like my flights to be.  We all slept in our respective beds that evening after a fun filled day of adventure.

The second trip took a bit longer.  The drive to Doswell, Virginia, the home of Kings Dominion, is around 8 hours from our home with no breaks or stops.  We elected to start our drive after my wife got home from work and stopped after about 5 hours at a motel in West Virginia.  Since this park is just over an hour south of Washington, DC, and the kids had never been, we finished the drive to a DC Metro station the next morning and spent the first full day of our trip walking around our nation’s capital in the rain.

After that full day and a nearby tornado, we finished the drive to our motel within easy walking distance of Kings Dominion.

We explored the park and its attractions over the next couple of days before making the drive back to Ohio once again.  Without a doubt, Intimidator 305 was a family favorite at this park.  Beyond the NASCAR theming, it is a completely different ride than the one that shares the root of its name at Carowinds and it is one of only 3 Giga coasters in North America.  The kids also enjoyed Volcano: The Blast Coaster and an older coaster known as Avalanche.

During the drive home we encountered the edge of some weather that had caused problems the night before in Ohio and would later cause Kings Dominion to close early.  We were also slowed for quite awhile by an accident that had nothing to do with the weather.  The GPS led us down some winding and twisting roads that really threw off its time estimates, especially at night with wet tires.  The kids passed the time with DVD after DVD until we arrived safely at our cozy and welcoming home.

These two trips were comparable in distance.  Now that they are in the past, I’ve have had some time to reflect on both journeys.

As you can well imagine, there is a difference in cost when travelling by Aztec vs. Grand Caravan.

Based on our current rental rates, about 4 hours in an Aztec would run just over $1100.  The ramp fee at Wilson Air Center was $25 since I didn’t need fuel and the rental car with fuel was less than $50 for the day.  You could fly for less in a smaller airplane but would need to plan for a bit more time.  I had 4 passengers with me so I needed the additional seats.  The cost for this trip would be around $1200.

Our Grand Caravan got about 21 miles per gallon while on the trip.  Taking out the side trip to DC, we were looking at just over 1000 driving miles or about 50 gallons of gas.  Gas averaged $3.75/gallon for the trip for a cost of around $187.50.  While not a direct cost, I would estimate wear and tear cost at around $200 (half of the difference between standard mileage rate and cost of gas) for this trip.  For a single day at the park, 2 hotel nights would likely be needed at around $75/night.  This trip would have a direct cost of around $350 plus you would be looking at additional meals away from home and wear & tear on the vehicle.  The total cost for this trip with these items factored in would be around $700.

Time is where the Aztec wins hands down.  The Aztec trip could be and was completed in a single day.  The van trip would take 2 ½ – 3 days.  For this reason, Mom was able to get away and join us on the Aztec trip but couldn’t get away for the van trip.

When it came to the two modes of transportation, both had their advantages and disadvantages but I think that my daughter summed it up best when asking about our next mini-vacation in a few weeks, “We are going to fly there, aren’t we?“