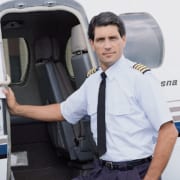 When I was in college at the University of Cincinnati, I joined Air Force ROTC. Being part of this military college class meant wearing the uniform all day every Thursday on campus. We could either wear our ‘dress blues,’ or our BDU’s (camouflage uniform). A few of my ROTC buddies dreaded wearing their uniform because we stood out in the crowd. But most of my ROTC classmates, including me, didn’t mind because they liked getting the looks and attention from other students. However, one of my ROTC classmates, Evan, not only loved to wear it, but wore his cleaned and pressed uniform every single day he was on campus.

I didn’t quite understand why he did this. I thought he was looking for the attention, or looking to please the Air Force officers who taught ROTC. Evan was a year ahead of me in the program and as the quarters went on I saw how successful he became in ROTC. He later graduated, received his officer commission, and became a fighter pilot based somewhere in California. This was exactly what he wanted. Looking back, I never remember my perceptions of why he chose to wear his uniform daily materializing. He knew what he wanted. He dressed the part and immersed himself in Air Force culture.

Sometime after I switched my major to a civilian aviation college program, I heard someone say the phrase “dress like you already have the job you’re seeking.” I think that’s what Evan was doing. This advice can apply to most careers, but definitely to being a professional pilot. If you intend to enroll or are already enrolled in flight training, with the end goal of making it a successful career, then dress the part. This is more than just the clothes you wear, but also the knowledge, attitude, and confidence that comes with studying, showing up prepared and on time to every flight lesson, and immersing yourself in the aviation community. I’ve held a number of different good jobs in aviation, and had to turn down other good offers along the way. I credit this to something I realized a few years ago; a good reputation will take you farther than your good pilot skills and ability. Aviation is a small world; with a bad reputation, you probably won’t even get an interview.

So make friends with your peers during your training, wherever that may be. Don’t make enemies and never burn a bridge. Dress professionally and be punctual. At you’re FBO you’ll meet instructors, students, or other connections to the professional industry, who you’ll make an impression on. Make it a good one. They are key to helping you advance to your goals. Good luck with your aviation career!