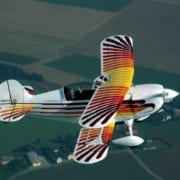 “Low wing airplanes were designed by the very devil himself. How do I know this? Because birds were designed by God and he created them with high wings”- quote by the late John Frank, Cessna Pilots Association.

You don’t have to hang around airports, airplanes or pilots very long until someone will crank up the high wing versus low wing debate. Early airplanes were called biplanes because they had two wings, one above and the other below the fuselage. This design was necessary because the early engines produced very limited horsepower. This meant the airplane, if were to carry anything, had to be built from very light materials incapable of providing support for a wing long enough to generate the needed lift. The bi-wing design allows two shorter wings to be braced against one another with a series of struts and wires providing the strength and lifting surface required.

Farmers utilize a similar system to firmly anchor a run of fence with an upright brace post reinforcing the end post. Shorter wings can also translate into greater maneuverability as evidenced by the aerobatic airplanes utilizing this configuration.

The ability to lift heavier loads with a shorter wingspan has also contributed to the long production history of the mighty Antonov AN-2, the world’s largest biplane, in production since 1947.

The bi-wing design has one serious flaw. Those struts and wires create a lot of parasite drag, an anathema for aircraft whose design and mission is speed. Throughout the history of aviation, whenever there has been a need, usually some enterprising engineer with a dinner napkin has risen to the challenge. In 1915 Hugo Junkers utilized metal construction and cantilevered wings to produce the first commercially successful monoplane and henceforth spawning the high wing/low wing debate.

The Case for High Wings

Some of the most successful General Aviation aircraft have been high wing models. This design, even in the wood and fabric world of early aircraft, carried such aviation icons as the Piper Cub and Aeronca Champ. After WWII, Cessna aircraft started to construct all metal high wing airplanes like the 170, 180 and 195. Then in 1956 Cessna moved the tail-wheel on the 170 to the nose and the resulting high wing 172, with well over 40,000 copies, became the best-selling civilian aircraft in history.

Why the success of high wings? By design they provide both shade in the sun and an “umbrella” in the rain for passengers during boarding or debarking. On the ground they offer clearance over many fences. On aircraft fitted with floats, the wings may also pass over docks and shorelines. High wing aircraft are inherently stable as the center of mass is located beneath the center of lift (compare hanging from a rope as compared to sitting on one). Short field landings can be shorter because the drag robbing ground effect is lessened by the greater distance between the wing and ground. Most carbureted high wingers can eschew fuel pumps, as gravity, except during prolonged inverted flight; will serve the purpose of getting fuel from the tanks to the engine.

And speaking of fuel, sampling the tanks does not require getting down on hands and knees. Some complain the view of the airport is blocked during the base to final turn in a high wing and this is true, but I haven’t experienced a runway moving during this turn. Granted, I have never made a carrier landing, but I have seen unannounced aircraft coming “straight in” on final while I am making that turn that would have been blocked by a low wing airplane. Finally, especially during cruise flight, the sights on the ground are unobstructed by the wings. On the down side are those diamond shaped scars on your forehead (Cessna pilots know what I am talking about).

The Case for Low Wings

In 1960 Piper engineers Fred Weick and John Thorpe developed the successful Cherokees and even Cessna has the low wing TTX in its piston engine stable. Many aeronautical engineers maintain a preference for low wing aircraft because of their simplicity in design. The same spar used to carry the load through the fuselage during flight can bear the load from the landing gear on the ground.

Low wing aircraft may be lighter because high wing airplanes require what amounts to a wing spar, a gear spar, and an additional structure running through the fuselage to connect the two. Fueling a low wing airplane usually does not involve a step ladder, and neither does checking the security of the fuel caps. The low wing being closer to the ground may allow for a shortened takeoff roll and faster acceleration because of ground effect – a powerful argument for heavily laden crop dusting aircraft (as well as providing a handy place to attach that spray boom).

By incorporating more dihedral, the longitudinal stability can be increased to match that exhibited by the high wingers. Mitigating the gravity’s refusal to make fuel run uphill, most low wing airframes incorporate a JT15D engine with a driven fuel pump backed up by an electrically actuated one to boost the fuel to the level of the carburetor or fuel servo. Though some of the ground may be obstructed, low wings offer an unparalleled view of the sky, or the moon, or a sunrise or sunset, or meteor showers, or maybe Air Force One flying overhead. And you can confirm, during the base to final turn, that indeed the runway is not moving (unless you are making a carrier landing).

Regardless if your flight school rents Warriors or Skyhawks, Evektors or Pipistrels, learning to fly will be largely the same. Both low wing and high wing aircraft will be affected by lift, weight, thrust and drag. Maneuvering speed will decrease with fuel burn and required runway will increase with weight, temperature and elevation. Takeoffs are optional while landings are mandatory and during normal flight, pulling back will make the houses get smaller. The high wing/low wing arguments, much as Chevy/Ford or John Deere/New Holland deliberations will probably only get resolved in the minds of their particular protagonists. In the end for the pilot, just like the difference in oral versus the “other” thermometers, it may just come down to a matter of taste. Some folks just like the looks of a low wing airplane; others will always prefer their airplane copy the structure of birds. Can you settle the argument? Now is the time for you to weigh in and add your comments in this debate.