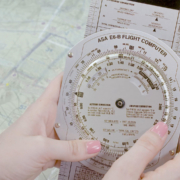 The E6B got its start in the late 1930s and 40s as a circular slide rule developed for military aviators. The name “E6B” actually comes from its original part number for the US Army Air Corps around that time. It went through many iterations during World War Two and eventually evolved into the version most pilots recognize today. Today’s mechanical E6Bs still use the same core circular slide rule logic as those from World War Two, but also include some additional capabilities. This week’s tip shows you the basic operation of the front side circular slide ruler and how to compute basic aviation conversions.