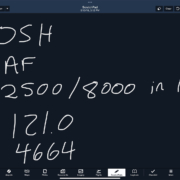 Flying a light airplane offers access to thousands more airports than the airlines serve, which means you can land closer to your destination, avoid long taxi routes, and save time. For an instrument pilot, though, there is one key difference between a smaller, non-towered airport and a larger one with an air traffic control tower: obtaining an IFR clearance.

Step one is the same no matter where you are, but step two can vary dramatically based on your departure airport. Here are three ways to get a clearance at a non-towered airport.

1. Call on the phone

In ancient times (i.e., the 1990s) getting a clearance at a remote airport usually meant calling Flight Service on a pay phone. The briefer would contact ATC and relay the clearance to you, which could occasionally be a lengthy process. After reading back the clearance, the pilot would run to the airplane, fire up the engine, and try to get airborne before the clearance expired. I remember doing exactly this during my instrument training at a very remote airport: the nearest pay phone was about a mile away from the airport ramp, so it was quite the accomplishment to lift off before my timer expired.

Today there’s a better way. First, ubiquitous cell phones make it much easier to call for that clearance. You can be standing by the airplane or even sitting in the airplane at the end of the runway. When you get the question, “which runway and how long until you’re ready?” you can answer confidently—because you’re first in line for the runway. 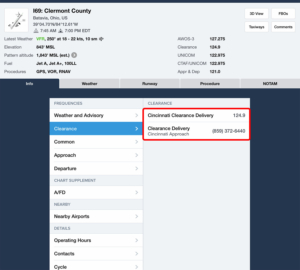 Apps like ForeFlight make it easy to find phone numbers for ATC.

Secondly, you can now cut out the middleman and call ATC directly. In 2019, the FAA began publishing phone numbers for ATC facilities that can be used by pilots to pick up a clearance. These are published in the chart supplement (the old A/FD) and are also easily accessible in most aviation apps. In ForeFlight, for example, go to the Airports tab, then Frequencies, and tap on Clearance. You’ll see any radio frequencies available, but you’ll also see a phone number and facility name there. If you’re using the app on your phone, just tap the number to dial it.

Pro tip: Connect your cell phone to a Bluetooth-enabled headset, like a Bose A20 or Lightspeed Delta Zulu, and enjoy the noise-canceling benefits of the headset’s microphone and ear cups. It’s much easier to understand those complicated IFR routes. Don’t have a Bluetooth headset? Use an Audio Link to add this feature to any aviation headset.

2. Call on the radio

Some airports offer a way to contact ATC using your airplane’s COM radio, eliminating the cell phone hassle. While most pilots call this an RCO (for Remote Communications Outlet), it’s technically called an RTR (remote transmitter/receiver), since RCOs are for Flight Service. No matter what you call it, the procedure is the same: tune up the frequency published in the chart supplement, approach plate or app, and press the push-to-talk button. Once again, you’ll be talking directly to a controller at a nearby ATC facility.

There’s another option that is pretty rare but still available at some airports: a GCO. These are a lot like RCOs, but instead of offering a direct radio connection to ATC, it uses a landline. Read the notes for each GCO, because details can vary, but in general you’ll need to do four slow and steady clicks on the frequency to wake up the GCO and dial ATC. When this happens, you will literally hear the phone ringing and you can then talk to the controller just like you would on a regular RCO.

Sometimes you can reach ATC using the same frequency used in the air, instead of an RCO or GCO. This depends on the terrain and the location of ATC’s antennas, so don’t assume it will work. If you’re landing at an airport, you can always ask ATC if the current frequency works on the ground.

Pro tip: If you’re having trouble reaching ATC, try switching radios. Many airplanes have one COM antenna on the belly and one on the roof of the airplane. Depending on where ATC’s antenna is located, one radio may have better results.

Sidebar: The elements of an IFR clearance 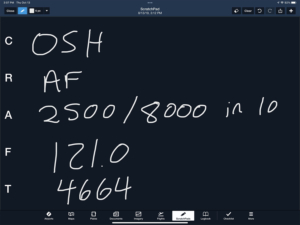 Once the person on the other end answers, whether it’s on the phone or over an RCO, you’ll be talking to a controller at a nearby TRACON or Center facility. Tell them your tail number, where you are, and the IFR flight plan you’d like to open. Assuming there are no issues, the controller will read out your clearance in the familiar CRAFT format: clearance limit (typically your destination airport), route, initial altitude and expected final altitude, frequency to contact departure control after takeoff, and your transponder code.

The second element is a void time, which is essentially an expiration date for your clearance. When ATC says “you are released for departure,” they are blocking the airspace around the airport so that no other IFR aircraft can take off or land. They obviously can’t do that forever, so if for any reason you cannot take off before the void time, your clearance is canceled and you’ll need to call ATC again. Sometimes this is delivered in a very wordy way: “Clearance void if not off by 1455 Zulu; time now 1445 Zulu; if not off by 1455 Zulu advise no later than 1520 Zulu.” This gets confusing fast, so many controllers will just say, “Clearance void if not off in five minutes.”

So a typical clearance would sound something like this (in this case over an RCO):

Pro tip: Remember that an IFR clearance only protects the airspace around that airport from other IFR flights. There could be a dozen VFR airplanes in the pattern, so look outside and make good radio calls on CTAF. 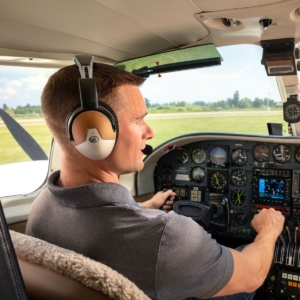 A good ANR headset like the Lightspeed Delta Zulu can make it a lot easier to get your clearance.

The last option is to take off VFR and then call ATC once you’re airborne to get your IFR clearance. This works well if the weather is good and you don’t need an IFR clearance to take off and depart the pattern. It’s usually faster and in some cases is easier for ATC—there’s no void time and no spotty RCO coverage issues. It can even be good manners, because it doesn’t tie up a taxiway while you call for clearance or prevent another IFR airplane from landing.

However, this procedure should only be used when both the weather and terrain are favorable. If the ceiling is 1500 overcast or the visibility is 3 miles in rain, you will leave yourself very little margin for error by scud running while you wait for an answer from ATC. Remember, until ATC issues a clearance and says “radar contact,” you are responsible for terrain avoidance. It’s also important to consider where you’re operating from—do not expect a happy reply if you try this with New York Center on a busy Friday night with marginal weather.

Pro tip: Prepare your avionics on the ground. With this option, you’ll be both flying and copying a clearance so the more you have set up ahead of time, the better. You know the route you filed (and apps like ForeFlight even tell you what route to expect from ATC), so load that in the GPS.