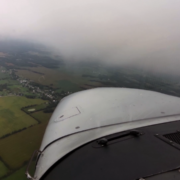 “Turn right heading 340, vector for inbound IFR traffic” was one of numerous delay vectors issued for arriving traffic at this busy reliever airport in the greater Dallas, Ft. Worth metropolitan area. The weather was marginal VFR making visual arrival procedures difficult as most inbound aircraft opted for the vectored approach procedure. It was an instant reminder of the vast skies and by contrast, the relatively small amount of pavement which we have to operate aircraft. And affirmed our decision for some extra fuel to manage those unplanned delays.

For controllers and pilots alike, we depend on the various mechanisms available to reduce separation standards and expedite arrivals and departures in order to make the air traffic control system work efficiently. if we didn’t have access to the variety of visual IFR procedures or the option for VFR flight, the system would quite simply be overwhelmed. Where the breakdowns and inefficiencies occur, can often be attributed to a lack of awareness on the part of pilots or failure to take advantage of our options for combining IFR and VFR flight.

The recent initiative to publish direct telephone numbers to ATC facilities issuing clearances as well as the national flight service number (888-766-8267) have made obtaining IFR clearances on the ground less onerous. However, should there be inbound IFR traffic or multiple aircraft awaiting IFR releases, you could experience an untimely and unnecessary delay. If weather permits, you might consider a VFR departure with an IFR pick-up once airborne.

The cautionary note is to ensure you can safely and legally fly VFR while managing the additional tasks and potential complexities that come with receiving an IFR clearance. There’s also no guarantee of how quickly you may be able to obtain the clearance so you must be thoughtful in your route planning taking steps to avoid any restricted airspace, obstacles and of course, instrument conditions. Some local knowledge goes a long way in determining whether a VFR departure is a viable solution. Talk to the local pilots for some insight on how accommodating the local facilities may be.

If opting for an airborne clearance, do a little research to ensure you are tuned to the best frequency for the facility.  There are a number of resources to assist you.  Consult the approach chart for your departing airport to obtain the local approach/departure (or air route traffic control center) servicing the airport. Have equipment ready to copy your clearance, and keep in mind that you may not always receive the route filed.

And even when departing IFR, do remember at airports without published instrument departure procedures, you will still need to ensure that you can climb visually to a safe altitude. To determine a safe altitude, consult the Low Altitude En Route Charts (L-charts), a necessary part of your preflight preparation, which will allow you to determine minimum IFR altitudes for obstruction clearance.

If VFR conditions exist once you reach altitude, another option would be to cancel your IFR clearance entirely. You could still opt for VFR flight following if you wish to have ATC resources and services still available.

There is a tremendously underutilized IFR clearance option to fly visually while en-route known as VFR-on-top.  A pilot on an IFR flight plan operating in VFR weather conditions, may request VFR-on-top instead of a traditional assigned altitude. The request must be initiated by the pilot and permits an altitude or flight level of the pilot’s choice subject to any additional ATC restrictions. This can be particularly helpful flying in the low to mid altitudes if you intend to avoid the rougher rides in and out of clouds or potential icing conditions as it permits operation above, below, or in between layers.

Additionally, pilots do have the discretion to combine an IFR and VFR flight plan to mitigate or take advantage of specific weather conditions on departure, arrival or while en-route. In this case you would plan to begin or end your IFR segment at a specific fix.

In the event that your IFR clearance is necessary only to transition through a cloud layer or is limited to the terminal environment, many facilities will be able to accommodate your request without having to file a flight plan with Flight Service.  This is sometimes referred to as a “pop-up IFR clearance.”  State your request with ATC in a clear, concise, and confident manner, and you’re likely to receive a more accommodating response.  ATC will need some basic data on the aircraft and confirmation that the aircraft and pilot are capable of the IFR clearance. A word of advice: don’t attempt “pop-up IFR clearances” in high density traffic areas or as a way to circumvent unfavorable routing.

When maneuvering for an approach under IFR, you may very well have the option to execute a visual approach which will certainly result in a more efficient arrival. A visual approach is conducted under IFR but authorizes a pilot to proceed visually and clear of clouds to the airport. The pilot must have either the airport or the preceding aircraft in sight. Reported weather at the airport must have a ceiling at or above 1,000 feet and visibility 3 miles or greater. Since this is an IFR clearance, VFR cloud clearance requirements do not apply. Visual approaches may be initiated by ATC at towered airports, but pilots will be expected to indicate when the airport is in sight signifying they are in a position to accept the visual approach clearance. Visual approaches may also be requested by the pilot with the appropriate visual cues and must be requested by the pilot at non-towered facilities.

Finally, for pilots operating to a non-towered airport, if VFR conditions exist, it is often more convenient and efficient to cancel IFR and proceed with a normal VFR traffic pattern and arrival. This will allow better blend or adapt to local VFR traffic flow and free up valuable airspace for any awaiting IFR departures. It also eliminates that embarrassing mistake of forgetting to come back to ATC or flight service to cancel your IFR clearance once you’re safely on the ground.

I typically reserve VFR departures with the intent of an IFR pick-up airborne in familiar areas – either my home airport or airports I use frequently where I’m confident airborne clearances can be easily accommodated and where I’m also familiar with terrain. It’s also wise to establish personal minimums for any form of visual request – whether that is a visual approach request or cancelling IFR and proceeding with your VFR arrival.

Take added caution in the additional tasks and unplanned routing that is always possible with airborne clearances.