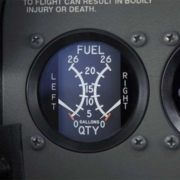 You’ve heard the cliche: flying isn’t dangerous, it’s just unforgiving. This may be a tired saying, but it’s very true, and if we’re honest with ourselves, this challenge is part of what makes flying so rewarding. If we can master such a complex and demanding skill, we can rightly feel proud.

The unforgiving nature of aviation has serious consequences, though, consequences we should remember every time we enter the cockpit. If we’re unrealistic about our new year’s resolution, it probably won’t hurt us. Flying is a different story. There aren’t many second chances.

Be realistic – if the fuel gauges show almost empty, it’s time to land.

In this unforgiving environment, one of the most critical skills is the ability to be realistic. The point is, whether we’re dealing with aircraft performance, weather, or avionics, we have to be constantly readjusting our sense of the situation: What’s going on now? How does that compare to my expectations? Do I need to adjust my plan? What else might have changed given this new information?

A pilot who becomes lazy, or hangs onto old information because it’s comforting, sets himself up for all kinds of mistakes. Consider these common accident scenarios:

Confirmation bias is at work in a big way here, because we all lie to ourselves when it makes life easier. We embrace the one METAR that shows VFR conditions, since it matches our plan, even while we ignore the 20 other METARs showing IFR. One way to fight this urge is to imagine you are giving advice to someone in your situation. Taking this outside view has been shown to improve decision-making in all kinds of activities, including flying. Or as one of my early flight instructors said, “start writing your own NTSB report and see how it sounds.” That’s usually enough to make me reconsider a 50/50 decision.

It’s not all bad news. One trend that suggests pilots are becoming more realistic in their approach to risk management involves Cirrus airplanes and their built-in parachute systems. There are now more parachute pulls and yet fewer fatal accidents in SR22 and SR20 airplanes. It seems Cirrus pilots are becoming more realistic about their ability to save the airplane when something goes wrong (engine failure, severe ice, loss of control). Instead of trying to be a hero and save the airplane, they are pulling the red handle and saving their lives. That takes guts to admit, but it’s most definitely progress.

When we’re told to “be realistic,” it sometimes gets interpreted as “be conservative.” That attitude will probably keep you safe, but a truly sharp pilot knows the difference between conservative and realistic. The latter means continually evaluating current conditions and pilot skill, and never allowing them to get out of sync.