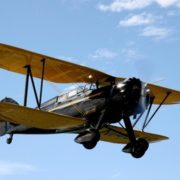 Ten days before my eighteenth birthday, I experienced the thrill of a lifetime …

Standing by the hangar alone, with not another participant in sight, I donned the numbered lanyard that I had been assigned–#1.  Flights went out on a first-come, first-served basis, and despite living 40 miles away from this charming, small town airport in Poplar Grove, I had arrived before anyone else.

Lively chatter filled the early morning air as the pancake breakfast was in full swing, punctuated by silence only when the crowd admired the droning of an incoming aircraft.  The day was picture perfect:  the slight breeze sweetly turning the emerald leaves of the trees, in stark contrast with the clear, sparkling sapphire sky.  I shuffled my feet, scraping the asphalt as I eagerly awaited my name to be called.  I was particularly excited about this rally because it was my 30th Young Eagles adventure; the surrounding landscape was already peppered with a wide variety of recreational planes, ready to transport kids into the wild blue yonder.

Suddenly, a large, noisy object nearly blotted out the sun.  As if in the grip of an unknown power, all heads swiftly swiveled in the direction of the awesome airplane.  Huge, black and yellow, roaring like a lion, it descended, dwarfing the rest of the competition.  Large, shiny propellers scattered the rays of sunlight, as the engine groaned to a stop and a nimble airman hopped out of the military biplane from years gone by.

Much to my surprise, a middle-aged man in a vintage brown leather jacket strode down the runway towards me.  His casual, old-fashioned vibe reminded me vaguely of Indiana Jones.  Like moths to a flame, history buffs quickly surrounded the warbird he left parked, admiring its prowess.  I was slack-jawed as this unassuming figure passed me to walk into the fragrant breakfast area, mingling with those who were able to conjure up words in his presence.

This, I thought, this dark giant is the plane for me.  What an absolute privilege it would be to explore the world from its vantage point.   Right on cue, Dawn, one of the congenial coordinators, approached me.  “You know, you could go up in that one, if you wanted.”

“The biplane?” I inquired incredulously.  I had assumed it was too much of a classic to be touched by anything other than the aviator’s careful hands.  She nodded, and I nervously replied “I’ll think about it, sure.”  Fear toyed with my dwindling courage, making me doubt whether or not I could really handle such an enormous aircraft.

“Sam,” my mother said with emphasis, glancing at me with one brow arched, “opportunities like these don’t come around very often.”

“Wait!”  I huffed as I speed-walked to the registration table, “Yeah, I’d like to fly in that one.  It’s pretty cool.”  Dawn winked at me and that’s all it took.  I happily ambled back to where I had stood before, anxiously waiting for the mysterious pilot to finish his delicious Sunday breakfast.

Soon thereafter, my mother and I were strolling up to the magnificent sky beast, bowled over by its immense size.  The proud owner from New Hampshire, John Ricciotti, explained that it was a 1934 Waco S3HD–the only one of its kind still flying.  I didn’t think it was possible, but my heart swelled, and I felt even more lucky to be co-piloting, let alone riding in his prized possession.

As we circled the perimeter, John pointed out its sturdy construction and interesting facts, like it boasted a gross weight of 3,400 pounds, all while expertly conducting the routine inspection.  After I carefully hoisted myself into the mammoth craft, my mom snapped pictures of my smiling face, barely peeking out from the back of the tandem seat, usually occupied by aerial gunners.  A dizzying preflight followed as I learned how the plane responds to turns, along with other pertinent data.  I hauled the army-grade straps over my shoulders, adjusted the cushy headset, and buckled in.  We were ready to roll!

I glanced around the cockpit, as the confident airman sat in front of me, checking over the instruments.  The interior was surprisingly basic, but efficient.  Exposed wood surrounded me, and I noted that I had my own throttle and gauges connected to the pilot’s by a cable, so we moved as one.  My feet rested on the rudder pedals, and I allowed plenty of room for the stick to change positions between my legs.  Better to do modified splits now then have a little bump turn into something worse, I mused.  I slid the glass bubble above me open slightly.

As we taxied down the rolling grass runway, Ricciotti shouted over the wind in the open cockpit, “OK, we have a basic preflight checklist…C.I.G.A.R–Controls, Instruments, Gas, Attitude, and Run-up.  I set the trim, remind me that I did that later.”

“Yes, sir!” I snapped, compelled by his authoritative manner.  As we waited for our turn to take off, he asked once again if he set the trim, and I responded in the affirmative.  Finally, the most exciting moment had arrived.

The great monstrosity of an aircraft hurtled down the runway at breakneck speed.  In fact, with a 450 horsepower engine, the acceleration was so extreme that I had to look down and catch my breath for a split second, before letting out an exhilarated whoop.  We roared into the heavens with all the ferocity of an eagle.  It felt like we were encapsulated in an air tank, threatening to swallow up the sky with its immense power and crush anything that dared to enter its path.  I could almost feel the stares of all those on the ground mesmerized by the sight of us.

“I have the plane,” I repeated with a grin.  I could hardly contain myself as I grasped the controls.  I was piloting the civilian model of a bona fide bomber.  After a couple of swooping turns, I got a feel for this heavy hitter.  Naturally, as a military fighter, its function was to dive, and every so often a little yank upwards was needed.  I peered through the top of the glass cover, at the endless expanse of blue, high above.  I’m actually living my dream.  I beamed.  Oh yeah, I’m never gonna stop flying!

“Give her a couple turns.  Don’t worry, it takes a lot to tip this thing.  I mean, you would really have to work at it.”  I didn’t doubt that for a minute.  Adding more rudder and aileron force, the airplane arced to the left, and then the right.  After a bit, John pointed out landmarks for me to use as guides, so we could get back to the airport.  With the utmost of vigilance, I followed roads and smaller planes maneuvering through the same rally flight pattern.  I thoroughly enjoyed the smooth ride, feeling totally secure as the solid biplane sliced through the air.

“You know, these Bose headsets?  Cost about two thousand dollars for both of them.  My friend who owned this plane before me, he didn’t wear any ear protection and used to make fun of me for buying these.  He’s about deaf now.  I asked him how much his hearing aid cost, and he said about six thousand.  I rest my case.”

I chuckled, and continued to follow the route, so focused that I lost track of time.  As we flew through the countryside, I asked the seasoned pilot questions about his impressive plane, enthusiastically absorbing the information, including how long he had owned this magnificent craft.

“I gradually eased back on the power, and the plane slowed in response, immediately tipping downward.”

After a while, Ricciotti issued another command.  “Pull back the throttle, we’re coming in for a landing.”  Although several embarrassing seconds elapsed before I complied, I gradually eased back on the power, and the plane slowed in response, immediately tipping downward.  For an instant I was a soldier on a military mission, entrusted with the daring role of a tail gunner. However, I was jolted back to the present when John announced that he would then guide the plane and instructed me to crack open the cockpit cover.

The wind was so powerful it felt as if a hundred miniature whips were striking across the back of my neck and down my shirt.  I couldn’t have cared less.  The view was unparalleled, and being engulfed in the unpredictable updraft made it all the more amazing.  I imagined that this is what superheroes feel like, streaking across the skies, cool air rushing against their cheeks.

As the picturesque homes and fields burst into full color, gaining clarity as our altitude decreased, I braced myself for impact.  Just as before, every head turned in our direction as we pounced onto the grass runway, welcomed by a sea of waving arms.  No doubt, this guy knows how to make an entrance, I thought, smirking.

We clambered out of the aircraft, and I couldn’t help but feel as if I was a minor celebrity.  Profusely thanking my mentor for the incredible experience, I shook his hand, soaking up all his advice about acquiring my license.  My heart beat wildly with pride when the pilot informed my mother about how well I operated his plane, especially because he is a flight instructor too.  Best of all, when John signed my logbook, he remarked, “Oh, that’s why.  Look at all these entries, you’re a vet!”

Blushing, I expressed my appreciation once again and firmly clasped his hand.  My mother did likewise, right before clutching me in a big hug.  That very same day, on our way home, we headed over to the local flight school to learn more about the entire process.

After nine years of driving me to one Young Eagles rally after another, my mom finally got the chance to sit in the cockpit with me as I explained all of the controls.  Recognizing the meaning behind the twinkle in my eyes, we both knew that I was definitely going to reach for the sky, and earn my wings.  Someday, it would be my turn to graciously introduce others to the spectacular world of aviation.

Walking back down the dusty road to our car, I laughed as I remembered what Ed Myers, the EAA Chapter 1414 President, said to me when I returned to the airport, “By the way, I’m so jealous.”