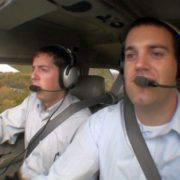 We had just taken off from a scenic airport in the foothills of the Appalachian Mountains, and everything seemed to be going fine. This was my last dual cross country before my instrument rating checkride, and I was beginning to feel confident. Unfortunately, that confidence proved to be short-lived. Just after I called Indianapolis Center to advise them I had departed, my flight instructor keyed the mic and calmly said, “Cancel the IFR flight plan; we’re headed back to our departure airport.”

I was stunned. What happened?!

My flight instructor was doing what he did best: teaching me a valuable lesson in a way that I would never forget. The lesson was simple. In mountainous terrain, you can’t just blast off and start climbing; you need to review the terrain and the departure procedures, and make a plan to stay away from hills until you’re in radar contact. That might even mean climbing out over the airport in a continuous turn until reaching a minimum altitude, which we proceeded to do on round two.

Don’t let your CFI go easy on you, but don’t accept abuse either.

He could have asked me a question on the ground, before takeoff, about my departure plans. He could have questioned why I wasn’t turning right after departure. Instead, he let me do the decision making as far as possible, then he corrected me. We turned around, landed, discussed the problem and then tried it again.

I was embarrassed and more than a little mad. But my flight instructor wasn’t wrong – if I would have been on a checkride, I would have failed. Not surprisingly, I’ve never made that mistake again and I have a deep appreciation for pre-departure briefings in the mountains.

Tough instructors are like this. They go beyond FAA standards and deeper than the textbook to teach you things that really matter, in ways that make an indelible impression. Over the years, I’ve had a few right seat companions who deserve the adjective “tough,” but in looking back over those lessons I’m glad I had them. Those training flights weren’t always fun but they were incredibly valuable. I learned things I didn’t even know to ask, and I gained more than just competency – I gained confidence.

Besides the IFR departure episode in eastern Kentucky, I can vividly remember three other challenging dual flights, all with important lessons:

I know I was better prepared for my checkrides because I had tough instructors. I also know that two emergencies I’ve dealt with since turned out well because of the training I received. I didn’t completely understand what I had signed up for at first, but I can’t imagine training any other way.

Make sure you have goals to measure your performance against: the ACS, a syllabus, etc.

Secondly, a good student-CFI relationship involves lots of communication. If you have concerns about your flight training – whether you feel it’s not tough enough or too tough – talk to your instructor. If a lesson leaves you feeling angry or upset, don’t keep that bottled up, as it will probably affect your next lesson. It’s probably a good idea to wait a day or two to cool off, but make sure you talk things over.

Third, make sure you are measuring your progress against some standards. One of the most important things for any student is to feel that they’re making progress. If the criticism feels random, it’s hard to stay motivated. My instrument instructor and I agreed that, since I was going to use my instrument rating to fly cross countries in real IFR conditions, the Practical Test Standards were not enough. He was demanding, but he was fair because I always knew the standards I had to hit (one dot deflection on ILS approaches, for example).

The line between not tough enough and too tough is often a fine one, and as the student you are a customer – it’s up to you to walk it. You should demand an instructor who teaches more than the minimum, but you should not accept one who makes personal attacks or is unfair. The questions to ask yourself are: “Is this training working for me? Am I achieving my aviation goals?”