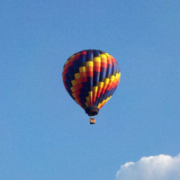 An activity that many pilots enjoy involves sitting at the airport and watching other pilots takeoff and land.  While enjoying this pastime you may see some aircraft that look a bit different from your typical trainer.

You may see an airplane with more than one engine.  These are known as multiengine airplanes.

Your airport may be home to jet powered airplanes.  These airplanes do not have a propeller.  They get their thrust through the exhaust of the jet engine with some help from a ducted fan that is powered by the same engine.  These engines may also be called turbine engines.

You may see an airplane with a propeller but whose engine sounds like a jet.  These airplanes are known as turboprops.  The turboprop engine design is based upon the jet engine.  Instead of the exhaust providing the thrust, the majority of the engine’s energy is used to turn the propeller.

Some airplanes look like a cross between an airplane and a boat.  These are known as seaplanes.  They are designed to takeoff and land on water.  Amphibious seaplanes, which is what you will see at a traditional airport, are designed to operate from the water or the runway.

You may also see other aircraft besides airplanes.

An aircraft with a rotating blade over the cockpit is known as a rotorcraft or a rotary wing aircraft.  They are called rotary wing because spinning blades are actually airfoils that provide lift.  If you look at one closely when it isn’t operating, you can see that it is shaped like a wing.

There are two types of rotorcraft.  The more familiar type is a helicopter.  Helicopters use a piston or turbine engine to turn the wing.  Most also have a small rotor at the back.  It is used to prevent the fuselage of the helicopter from rotating opposite the main rotor blades.  The pilot changes the angle of the rotary wings in order to change the flight of the helicopter.

Another rotary wing aircraft is known by the FAA as the gyroplane.  You may also hear them called gyrocopters or autogyros.  The gyroplane looks a bit like a cross between an airplane and a helicopter.  The gyroplane obtains its thrust through an engine and propeller.  The main rotor spins as air is pushed up through it.  The rotor provides lift for the craft but it is not driven by an engine, only by the wind.

Gliders, sometimes called sailplanes, are a type of fixed wing aircraft.  They look kind of like an airplane but do not use an engine as their primary means of flight.  Many gliders have no engine at all.  These gliders must be towed into the air by another aircraft or towed aloft by a winch or car on the ground.  Motorgliders have an engine and propeller but their primary use is to get the glider off the ground.  Once in the air, the engine may be shut off for soaring flight.

If you see an aircraft with a triangular wing that looks like a motorized hang glider, you are likely seeing a weight-shift controlled aircraft.  WSC’s do not have traditional flight controls.  They are controlled through a steering bar that allows the pilot to shift his weight and the weight of the carriage beneath the wing.  This weight shift changes the flight of the wing to control the aircraft.  Some people refer to these aircraft as trikes.

An aircraft with a powered cart beneath a parachute wing is known as a powered parachute.  Powered parachutes are controlled by the pilot through the use of steering lines that deflect the back of the parachute downward.  The speed of the aircraft is relatively constant.  Adding or decreasing power simply changes the climb or descent rate.

Similar to the powered parachute, you may also see a foot launched powered paraglider or paramotor though these ultralight inflatable wings often fly from fields with some distance from an airport.  The pilot wears a harness connected to the motor and the wing.

Airships, often called blimps or dirigibles, are typically filled with helium gas.  Since helium is less dense and thus lighter than the air surrounding its envelope, the airship is pushed upward into the sky.  An airship will have motors for propulsion and will be steerable by the pilot.

Balloons have no means of propulsion.  Some steering is accomplished by the pilot using the winds at different levels to control the destination.  Most balloons use a propane burner to heat the air in the envelope and make it lighter.  Some balloons utilize helium or hydrogen gas to provide their lighter-than-air properties.

Now that you know some of the aircraft that you might see, why not join your fellow pilots relaxing at the airport and seeing the sights? 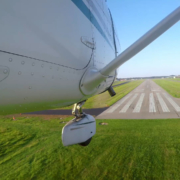 Ask a CFI – When should I begin reducing my airspeed while on final approach to landing?